A New Career In 'Site' 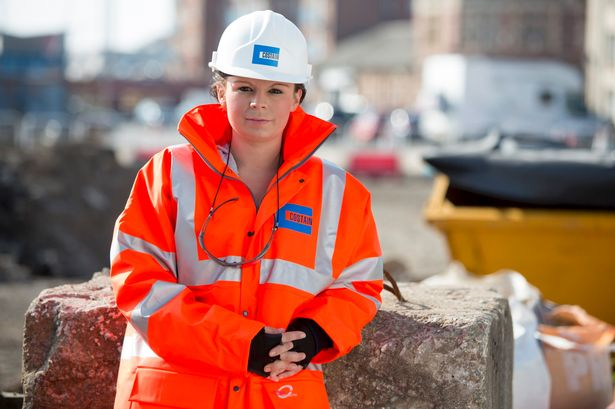 A 25-year-old mother from Aberdare has landed her dream job as a quantity surveyor after a brave career change from the beauty business.

Two years ago Judith Alcock, a Costain apprentice, was on the brink of opening her own beauty salon but after a last-minute change of heart, she decided to follow her childhood dream and retrain as a surveyor.

Judith is hoping to inspire other young women to consider a career in the science, technology, engineering and maths industries by attending SkillsCymru, Wales’ largest careers event which will welcome 10,000 people to Cardiff’s Motorpoint Arena on October 22 and 23.

Judith will join other female role models on the Chwarae Teg stand at SkillsCymru including the first female UK Young Engineer of the Year, Jessica Jones, who studied at St David’s Sixth Form College in Cardiff, and Alice Grey, a STEM ambassador from Pembrokeshire.

They will promote non-traditional roles for women in the science industries and talk through their experiences of work.

As well as gaining valuable careers advice, attendees to the event will be able to have their photo taken in uniforms from various industries to promote gender balance in male-dominated industries. The role models will also host an online chat for those who cannot attend the event on the day.

Judith, who now has a five-year-old daughter, had dreamed of working in the construction industry from the age of 14, but was put off by others who warned her against trying to pursue a career within a traditionally male-dominated environment.

Now, almost at the end of her apprenticeship with Costain, the mum is on track to becoming a fully qualified surveyor, working on site at Swansea Boulevard.

She will start a BSc in Quantity Surveying and Commercial Management next year.

She said: “When I started my GCSEs at Aberdare Girls School, I’d just moved into a new housing estate with my family. Seeing it being built around us was fascinating, and it was then I decided that one day I was going to be an engineer.

“People around me said that I would find it hard to get into the industry, being female, so that really put me off.

“When I left school, I started a business course in college but I had to put my studies on hold when I became pregnant with my daughter at 19.

“I took two years out of my studies to bring up my daughter and decided then I would get back into work. I’d always been interested in beauty so I returned to college to do an NVQ Level 2 in Beauty.

“I was really determined to get back into work and went about setting up my own beauty business.

“I kept myself busy getting the salon ready but two weeks before I was due to open, I had a sudden realisation that I didn’t actually want to be a beautician after all.

She added: “I think people have out-dated opinions on women working in the construction industry. I’m the only female quantity surveyor on site in Swansea but this doesn’t bother me in the slightest. It’s like having 100 big brothers around me. They treat me the same and I have never felt singled out just because I’m female.”