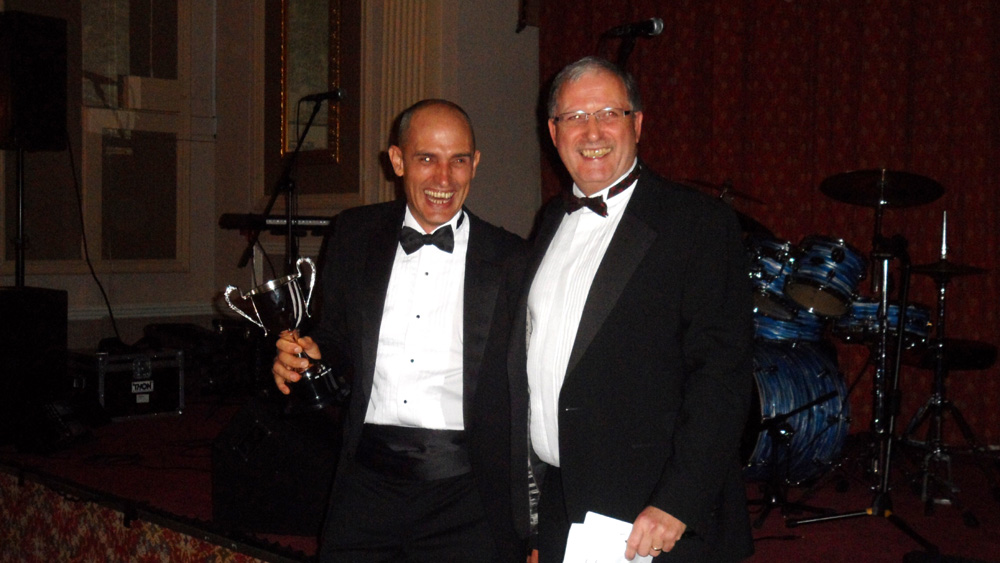 Bourne End-based Technician Drilling Operator, Antonio Vieira, picked up the winner’s trophy at the BDA’s annual dinner at Harrogate. The BDA is a trade association with over 100 member companies that promotes excellence, professional standards and safety in all forms of onshore drilling.

Antonio, who operates a drilling machine at sites around the country, completed a two-year apprenticeship in May, gaining an NVQ Level 2. The apprenticeship consists of normal working interspersed with a series of week-long courses on subjects such as drilling techniques, soil and rock logging, coring, sample collection and management, health and safety, grouting and anchoring.

He learned of his award from Geotechnical Manager, Wilton Bennett, a couple of weeks before the award.

“Antonio’s very hard-working,” said Wilton. “Regardless of what the job is, he’s very willing to just get on with it.” Wilton also likes the fact that Antonio thinks about what he’s doing, rather than simply following instructions: “He’ll voice his opinion, which is a good thing. He’ll ask questions and make suggestions.”

His award came as a surprise to Wilton. “We weren’t aware there was an award. I got a phone call saying ‘He’s been selected.’ I think the BDA was very pleased with his attitude and his interest in the programme.”

“It was fantastic,” said Antonio of the award ceremony. “It was like getting a Christmas present.” He is now lead driller on a transportable drilling machine that can penetrate 10 metres below the surface.

“Antonio was the most outstanding apprentice,” said John Grainger, chairman of the BDA, which arranged the training course. His award included him becoming the first recipient of the Derek Oakes Trophy. Oakes was one of the founders of the BDA in 1976.