Bridging The Gap In South Wales 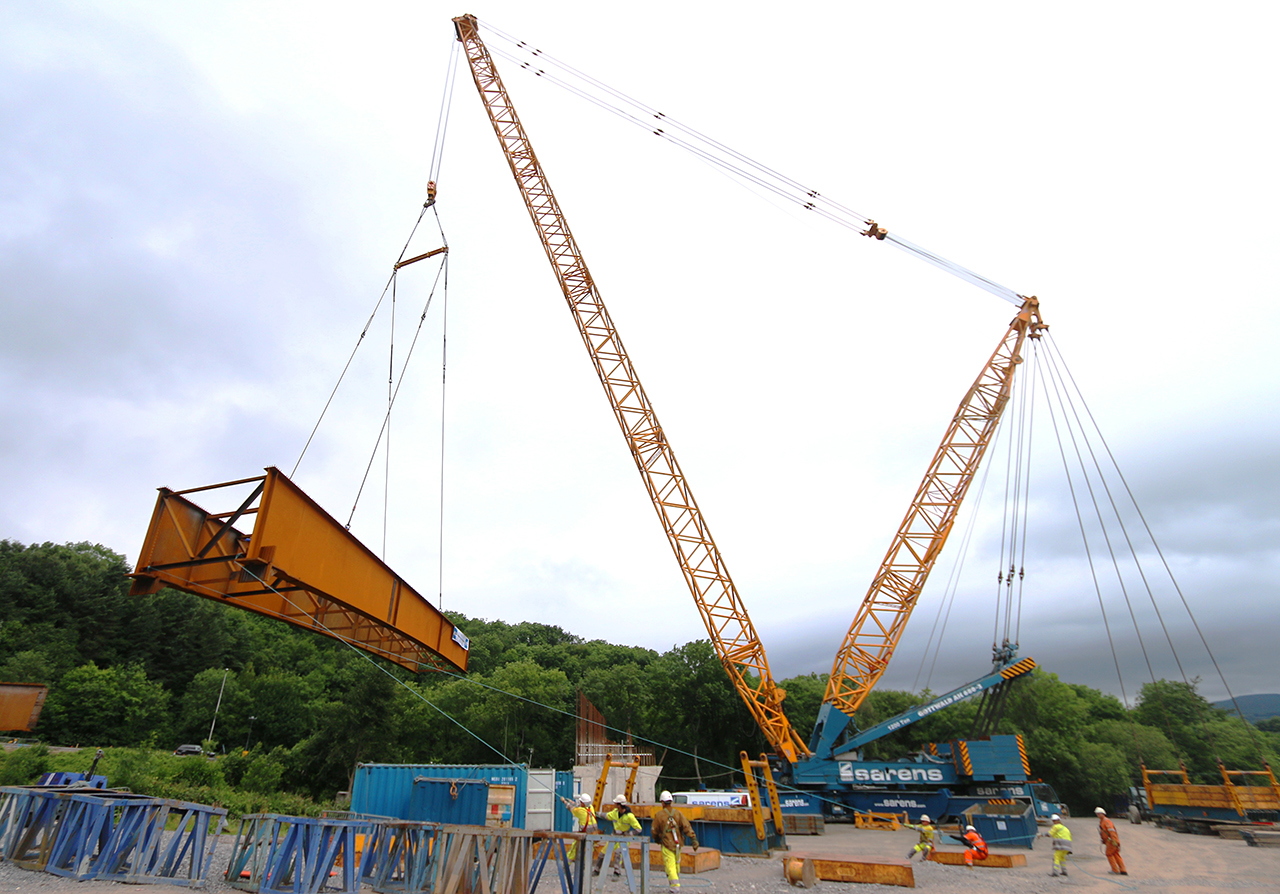 The UK’s largest mobile crane has been called in to help build a major structure on Costain’s A465 Heads of the Valleys road dualling project in South Wales.

The 1,200 tonne capacity Gottwald AK680-3 was brought in for a series of lifts to install the main deck girders of the Clydach River Bridge in an area called Saleyard.

Six 70-metre span weathering steel main plate girders were brought onto the site in sections by Victor Buyck Steel Construction, with the lifting being carried out by Sarens Group.

Pairs of girders were joined together with bolted splices and internal bracing into four-metre-high beams weighing 160 tonnes. The crane then lifted three of these pairs into place on the bridge abutments, ready to take an innovative precast concrete deck to be completed later this year.

“Usually the next stage would be to put up permanent formwork and cast an insitu deck. Instead, the whole deck will be precast in sections in a compound on site,” said Structures Manager Dave Morris. “There are two main reasons for this: it gives us critical programme savings and it also lightens the deck itself due to the reduction in support steelwork, so it’s a sustainable and a cost-saving engineering solution.”

With steel beams of this size a unique challenge for the team is to deal with thermal expansion. “Over a single day we have seen the steel lengths increasing by 15-20mm as they expand and contract in relation to the temperature extremes of the weather,” said Dave. “A key sequence of work is to get the timings right to grout the thrust plates in and cast the main diaphragms that will effectively lock the steel beams into the bridge at the required length.”

“After the diaphragms are cast and deck slabs are installed and stitched together we can then waterproof it, put on the parapets and handrails and install the full road surfacing.”

When complete, the piled integral steel composite bridge will have a single 67-metre clear span over the River Clydach.

“This bridge has given use some unique technical challenges, but we have a motivated, co-located team currently made up of staff from Costain, Atkins, Thames Valley Construction and Victor Buyck that gives us the confidence we will have every success in its delivery for our client, the Welsh Government," said Dave.

Currently, the bridge work is a month ahead of schedule, with target completion date the end of March 2017.

Caption: The UK’s largest crane lifts the beams into position.