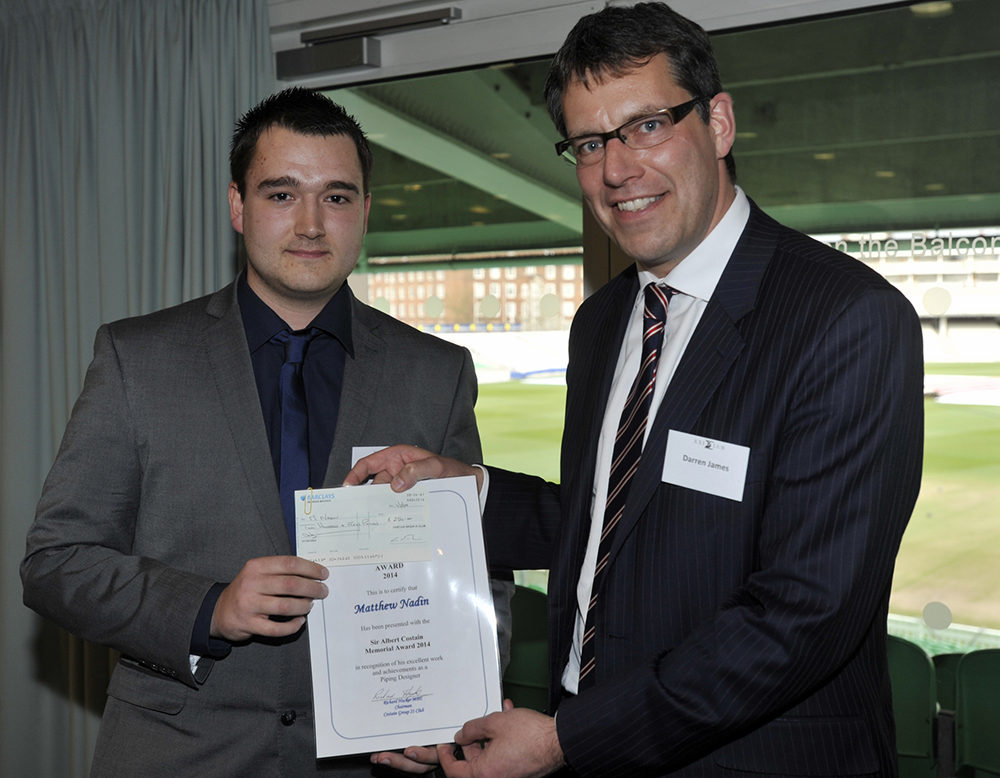 Costain employees past and present recently celebrated the contribution of the Company’s most promising young achievers at the Annual General Meeting and Dinner of the 21 Club.

Three young staff members received the prestigious Sir Albert Costain Memorial Award which is awarded to staff in recognition of their contribution to the Company and for getting the most out of the training opportunities presented to them.

After a record number of nominations from across the Group, this year’s prize winners were Matthew Nadin, a fourth year Piping Design Apprentice based in Manchester; Lydia Walpole, a Civil Engineer working on C336 Paddington New Yard; and Eoin O’Malley, a Graduate SHE Advisor working on the Heysham to M6 Link.

The Club’s committee identified the winners and invited Darren James, Costain’s Managing Director for Infrastructure, to present each one with a certificate and a cheque for £250 at a ceremony at the Oval Cricket Ground on April 4th.

Derek Smith, a Manager at Piping Design, said Matt’s real qualities lie in his genuine passion for engineering and his ability to channel that passion into his work.

“Whether it is a complex software modelling task or a requirement to deliver a rendered model at a moment’s notice, Matt eagerly accepts the challenge and sees it through,” said Derek.

Commenting on Lydia’s nomination, Rupert Shingleton, the Project Director at Paddington, said Lydia has taken every opportunity to train with Costain, whether it is on the training programmes or on-the-job learning.

Lydia successfully completed Costain’s Graduate Training Scheme in September 2013 and has notched up a number of notable achievements along the way. For seven years, Lydia was Master of the Worshipful Company of Construction Apprentice, paving the way for her to become a Freeman of the City of London. Lydia was also the first female contractor to become the ICE’s President’s Apprentice.

Eoin O’Malley joined Costain in 2012, initially based in the central SHE Department before taking up a project role within Rail Sector on the ABC Electrification contract and then moving to Heysham to M6 Link Road within the Highways Sector.

Bob Haley, the Project Director for ABC, said Eoin’s contribution was pivotal in developing the project SHE practices both before and through construction mobilisation.

Ian Nixon, Highways Sector SHE Manager, added: “Eoin has also been an active participant of the Graduate SHE Academy working on several projects including developing a SHE Monitoring Tool that will shortly be integrated into the Costain SHE Procedures helping to raise the bar across the Costain Group.”

The 21 Club was originally set up for staff who had achieved that number of years in the Company’s service. Eligibility today is now 18 years and the Club has around 700 members, of which 123 attended this year’s AGM and Dinner.

Next year, Costain celebrates its 150th anniversary. To mark the event, the 21 Club have invited seven past Chairmen and Chief Executives to the AGM and Dinner, which promises to be a special occasion.

“The Sir Albert Costain Memorial Award is an important part of the 21 Club Annual Dinner, particularly as we look to the future and celebrate the calibre of the young people across the Group,” said Alistair Handford, the Chairman of the 21 Club.