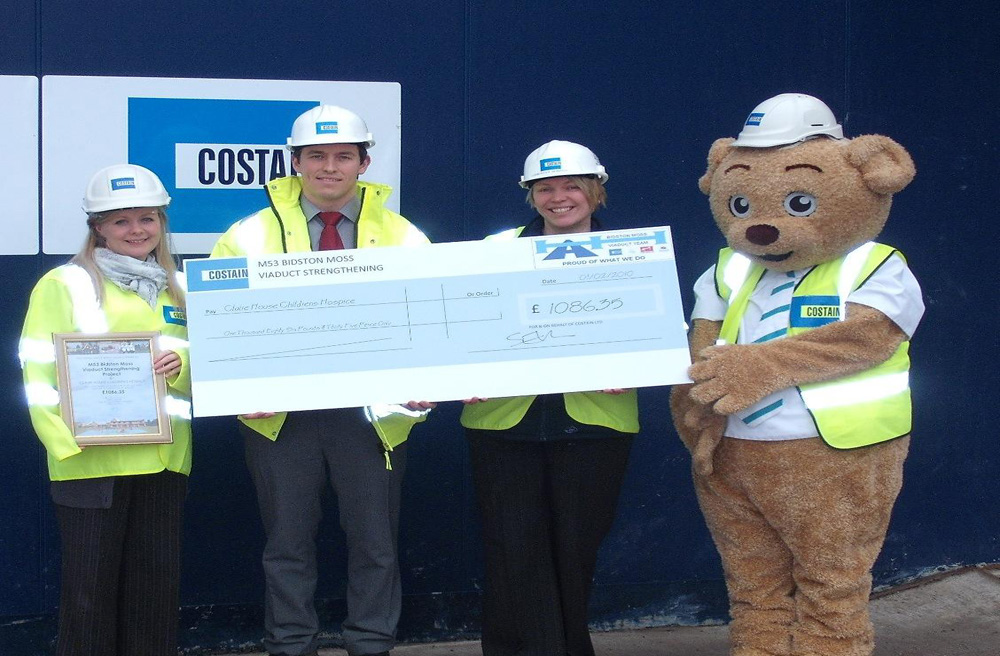 Costain Staff at the M53 Bidston Moss Viaduct Strengthening Project have been digging deep in their pockets to raise over one thousand pounds for their chosen local Charity - Claire House Children's Hospice at Bebington, Wirral.&nbsp;

The Charity is for children with life limiting, life threatening conditions across Merseyside, Cheshire, North Wales and the Isle of Man.

Funds have been raised by the site team at a number of site social events including a raffle at the 'Greyhound Racing Night' to celebrate the first 100,000 man hours worked without a reportable accident.&nbsp; Prizes were donated by Denholm, Cleveland Bridge, Concrete TS, BHL Electricals, Conemasters, BMSL and Costain.

The cheque was warmly received by Kirsty Wright and Claire the Bear at a presentation at the Bidston Moss site. The M53 Bidston Moss Viaduct Strengthening team will continue to support the charity for the duration of the project (which is due to be completed spring 2012) with further initiatives, including a visit to the kids at the hospice by the site team who will be bringing along a JCB.

Simon Ellison, Costain Project Manager, said: "The next major safety milestone will be one million man hours without a lost time accident and a site trip to Chester races if successful! The site is well on the way to achieving this with 280,000 man hrs recorded and an AFR (accident frequency rate) of zero."