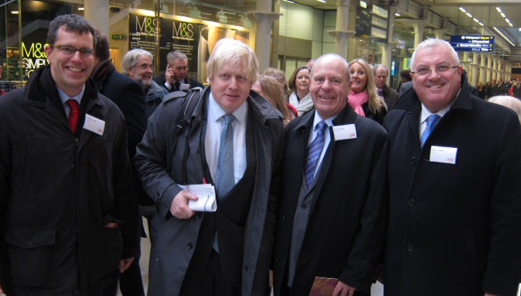 “A fantastic spectacle” was how Infrastructure Managing Director, Darren James, described the running of a steam train through London Underground tunnels – the start of a year-long Costain involvement with London Transport Museum as the capital’s Underground system celebrates its 150th anniversary.

The trip replicated the early years of the Tube, when passengers had to cope with the smoke and cinders thrown out by the early locomotives in the tunnels under London’s streets. Thousands turned out to see the event.

The Costain team then moved to one of London Underground’s (LU) newest trains for the short trip to St Pancras Station to meet London Mayor Boris Johnson, LU Managing Director, Mike Brown, and other senior LU and rail industry personnel.

Costain is one of the industry sponsors of events to be staged at or by London Transport Museum during the 150th anniversary. “Given the growth of the rail sector in Costain and the ongoing momentum, we felt it was appropriate we participated in one of the rail industry’s most important celebrations,” said Darren.

“London Transport Museum is one of the best, industry-recognised focal points for not only transport in London but the rail infrastructure generally – where we are arguably the biggest deliverer.”

Costain is involved in the major upgrade and expansion of Bond Street Tube station and is in the process of handing Farringdon Station back to LU after a major reconstruction project.

It is also involved at London Bridge and Paddington Stations for Network Rail and Crossrail respectively; both are important Tube stations.

In a joint venture with Vinci, it is also tendering for a major upgrade of Bank Station, one of the busiest on the network. The project will include a new southbound Northern Line tunnel enabling the platform to be widened, reducing crowding, plus a new Northern Line concourse with additional passageways and escalators to the Docklands Light Railway (DLR) and Central Line.

Over the decades LU investment and Costain involvement has produced a major contribution to the capital’s infrastructure. Projects like Bank demonstrate the Company’s determination to continue that link.