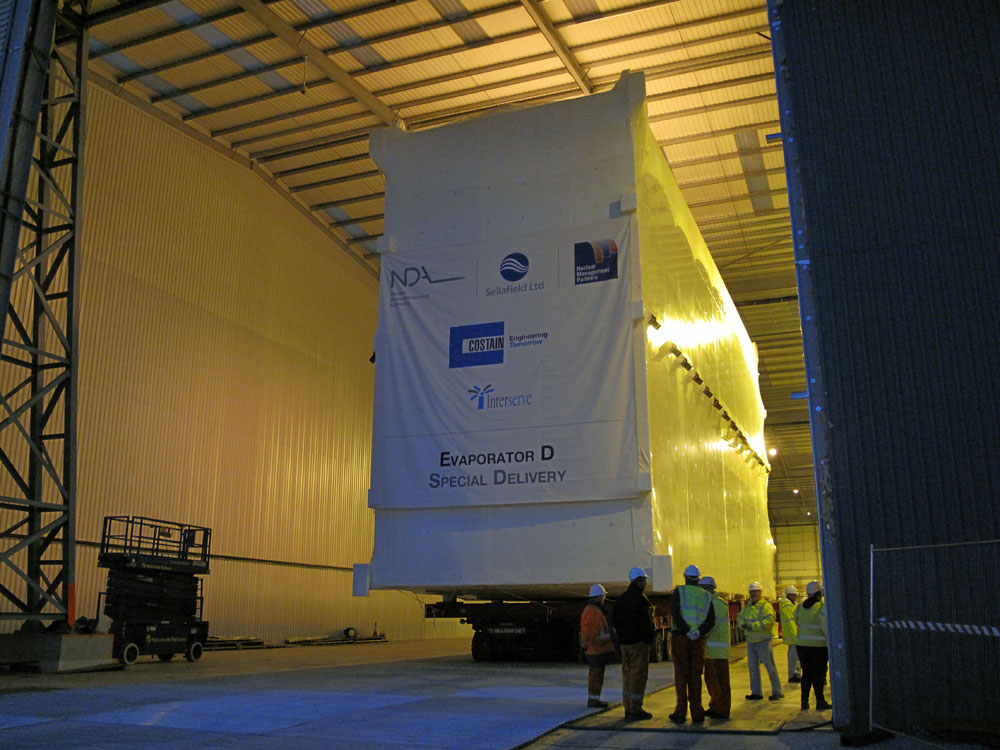 Costain has completed the task of delivering the last major module to be installed at Sellafield’s Evaporator D, the UK’s largest nuclear project.

Measuring 27 metres long x 7 metres wide x 12 metres high and weighing around 525 tonnes, ‘Module 920’ was safely landed on a beach near Sellafield on 24th September before travelling to an offloading position at the Evaporator D site on 25th September. Evaporator D, or EVAP D, is a new highly Active Liquor Evaporation operating unit that will provide additional evaporator capacity for the treatment of nuclear waste.

Module 920 contains two of the main vessels that are required for evaporation, housing over 5,000 metres of high integrity stainless steel piping as well as 23 vessels that have been constructed and installed to meet exacting nuclear quality standards.  Completion of the module has involved the efforts of 150 people.

“The safe delivery of Module 920 is a huge milestone for the project and we are delighted to receive this critical piece of infrastructure which will now allow us to focus our efforts on completing the project,” said Rob Phillips, EVAP D’s Programme Director.

The logistical challenges started on 15th September when Module 920 was transported from its assembly plant for a mile-long journey to Manesty Wharf in Ellesmere Port, Cheshire. As the module is so big, the team used a 256-wheel Self-Propelled Modular Transporter with two V10 500 horsepower truck engines to move it.

At the quayside, the laden transporter was driven on board a multipurpose pontoon, the MPP Terra Marique, and secured over several days in preparation for the 19 hour journey by sea to Sellafield, where the pontoon then made a beach landing adjacent to the site. Transferring such an enormous piece of equipment posed significant challenges for the team, not least the changeable weather.

“The weather conditions for sailing and moving the module had to be particularly favourable – the wind had to be below Force 5 and the waves on the beach no higher than 0.5m,” said Rob.

To get the modules from the beach to the site, the team had to construct temporary beach access, a temporary bridge across a tidal area and an enormous gantry to lift and then fit the modules into place.

“The beach was prepared with a portable aluminium roadway which allowed the transporter to drive off the pontoon and over the beach across the River Ehan and then via a short section of public highway onto the site,” Rob said.