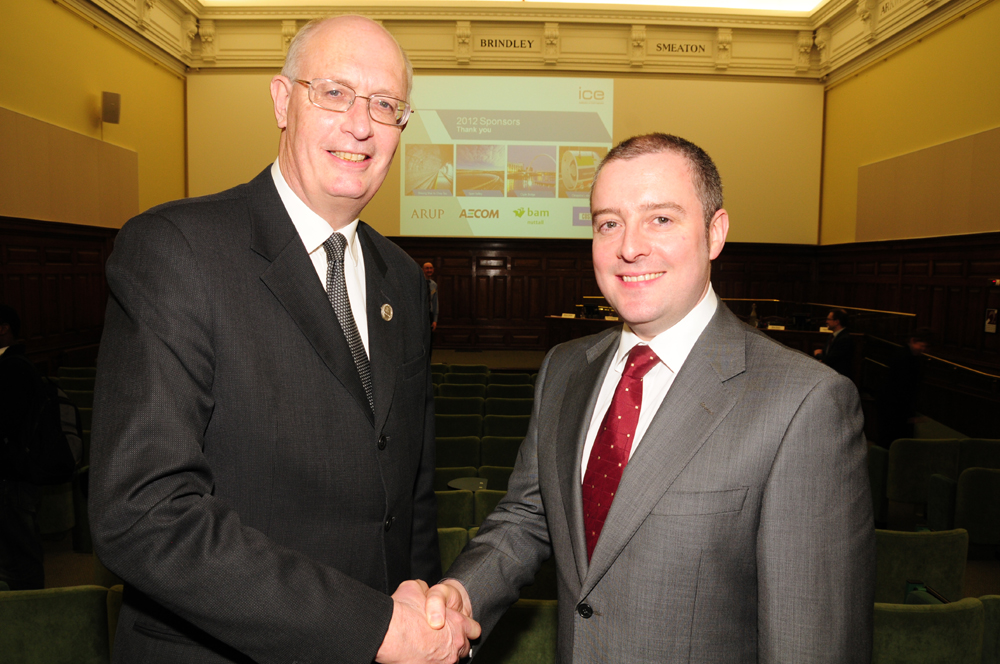 Costain’s  Eamonn Slevin is the winner of this year’s James Rennie Medal Award, following the annual event at the Institution of Civil Engineers’ (ICE) London HQ on March 1.

The award brings both the prestige of the James Rennie Medal as well as a £1,000 prize. It is named after the man who in 1930 became the ICE’s youngest member and spent 70 years in the profession.

To give some idea of the scale of Eamonn’s achievement, the event is open to all engineers who gain Chartered status over the preceding year. In 2011, some 1,100 achieved this and the ICE initially picked a shortlist of 12 before narrowing that down to just three finalists.

Eamonn, who is Construction Manager on the M53 Bidston Moss Viaduct Strengthening Scheme, presented and defended his Chartered Professional Review project report on the viaduct to a four-strong judging panel and audience.

“It was an overview of the project and some of the challenges I encountered,” said Eamonn, who admitted to some trepidation at presenting his project report. “Even though I carry out monthly briefings to large numbers of staff and personnel I found it a little nerve-racking.”

The Bidston Moss project involved strengthening the viaduct on The Wirral that carries the M53 motorway over a railway and roundabout. The 730m-long, 37-span steel box-girder structure dates back to 1969. Like many bridges of that construction method and vintage, structural updating was required to remove the BD79 weight restrictions and monitoring regime.  Without the refurbishment works the viaduct faced closure, a move that would have had considerable economic repercussions for the Liverpool area. The BD79 restrictions were removed three months early and the scheme is due to handover ahead of programme before the end of the month.

The necessary strengthening saw 600 tonnes of steel installed inside 3.7km of box girders. The project was also notable for using 2,800 tonnes of scaffolding and containment – the largest scaffolding installation in the UK at the time.

Among the challenges faced by Eamonn, who was also Temporary Works Coordinator, were the risks of working at height given the huge amounts of scaffolding involved and the logistic challenge associated with large numbers of people working inside the confined surroundings of the box girders.

Costain was one of the four sponsors of this year’s award. "Costain was delighted to sponsor the 2012 James Rennie Medal Award because its aims resonate so well with our target of developing our people,” said Darren James, Managing Director, Infrastructure.

Darren is himself a previous holder of the James Rennie Medal, winning the inaugural competition in 1996. Simon Ellison, Project Manager on the Bidston Moss project, won in 2007.