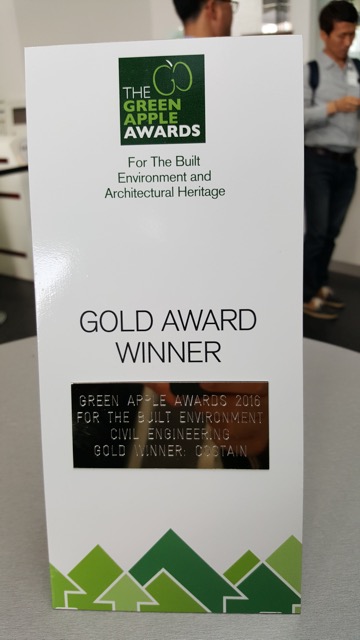 Costain’s London Bridge Station team has won a gold Green Apple award in recognition of its high performance in making a positive contribution to the built environment.

The team has implemented an array of innovative sustainable solutions in both design and construction. These include:

Ben Shaw, London Bridge Station Environment Manager, said: “This award fully demonstrates how the project is dedicated to achieving sustainable excellence, and recognises how we have built a lasting legacy for the rail sector and the surrounding local area.”

Annamarie Compton, Network Rail’s Consents Manager, added: “Winning a Green Apple Award is testament to the project’s ongoing commitment to the pursuit of environmental best practice. To win gold in the first application is an outstanding achievement and the project should be extremely proud.”

The award was presented in the Built Environment and Architectural Heritage Best Practice category at the International Green Apple Awards at The Crystal, London, in August. The Green Apple Environment Awards were launched in 1994 by The Green Organisation and recognise the environmental efforts of businesses in the UK and internationally.

The London Bridge Redevelopment project is a vital piece of the Thameslink Programme, part of Network Rail’s Railway Upgrade Plan. When completed in 2018, the Thameslink Programme will transform north-south travel through London, providing more frequent, more reliable journeys for passengers. Scheduled for completion in January 2018, the London Bridge redevelopment project will see through-station passenger capacity rise to 90 million people a year from the current 55 million.