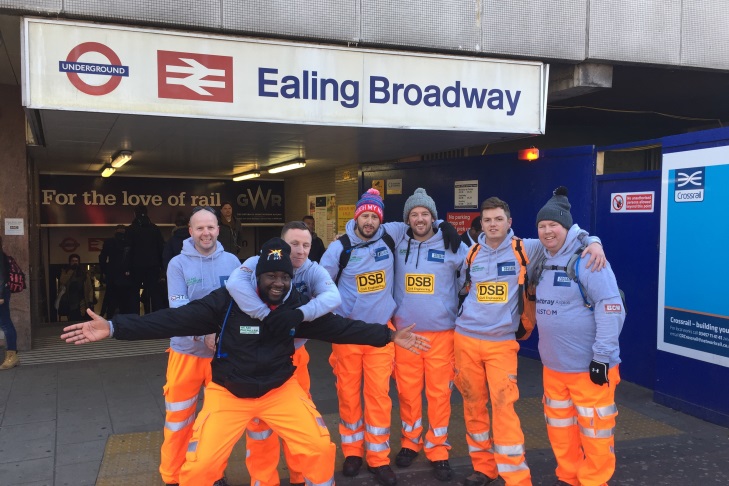 A team led by Costain Foreman, Steve Kerslake, recently became the first people to walk the route of the Crossrail project. The hikers, formed of seven representatives from across Network Rail’s Crossrail Anglia Project, exceeded their £8,000 fundraising goal, with the proceeds going to Macmillan Cancer Support. The team’s brisk pace had them covering over 30 miles every day. To raise the funds, forty stops on the route’s stations were sponsored by suppliers, an idea borrowed from a sponsored golf tournament.

Steve first thought of walking the route as “a stupid idea,” after hearing about someone who’d marched from Heathrow to Shenfield. “I’d been to the 2015 Costain awards night where there were examples of what people had done for charities like Macmillan,” Steve said. “This made me think of doing the whole Crossrail route with the guys at Crossrail Anglia. I asked Costain’s George Ncube to be involved, and five others from our suppliers and Network Rail joined in.”

The photos are all smiles, but the route took a hard toll on the team. “The distances left us more tired than we ever expected,” Steve said. “If we didn’t have the sponsorship hanging over us it would’ve been easy to throw the towel in.”

Throughout their challenge the walkers passed by several Costain projects. Having heard the team was nearby, staff from the projects came out to lend their support as they passed through. “We want to especially thank the project teams at Bond Street, Paddington, and Crossrail Anglia, who put on hospitality for us, which made it all that more easier,” Steve said.

After three solid days of hiking the weary walkers were pleased to make the finish line at Shenfield. Even with blisters and sore feet, the team are already talking about doing something similar next year. To learn more about the ‘Crossrail on Foot’ challenge including sponsorship information, visit their JustGiving page