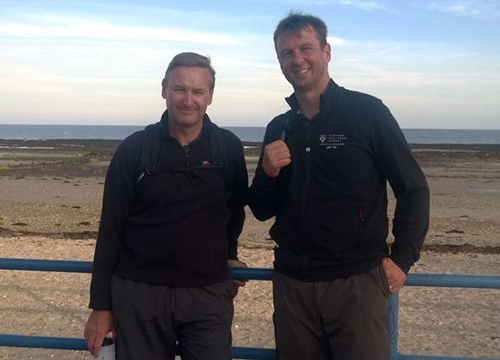 The people of the Isle of Man have a saying that "every man knows where his shoe hurts him", and that certainly applies to Tony Bickerstaff and Alex Vaughan who have just completed a 159 kilometre trek around the island to raise money for Costain’s *150 Challenge.

Tony, Group Finance Director and Alex, Managing Director for Natural Resources, raised nearly £6,000 for the appeal and this will be doubled when Costain matches it at the end of the year.

Alex and Tony walked the famous ‘Raad ny Foillan’, or Way of the Gull, a coastal footpath around the Isle of Man which was created to mark the Island's "Heritage Year" celebrations in 1986. They covered the distance in just four days, averaging over 10 hours a day in their hiking boots.

“Without a doubt, the biggest challenge was the physical effect of walking for over 10 hours a day. The marked changes in elevation and walking conditions included fields, roads, cliff side single track paths, moors, beaches and meadows. The scenery was as varied as it was spectacular,” said Tony.

He added: “I would absolutely recommend it to anyone to go and do the coastal walk, but give yourself at least seven days to do it. Your feet will thank you for it.”

Tony and Alex set off from Douglas, the capital of the Isle of Man, on September 24th and followed the coastline south to Port St Mary, up through Peel, north to Jurby, before heading east to Ramsay, Laxey and finally arriving back in Douglas at 6pm on Sunday 27th September.

Costain has its roots firmly in the island. Richard Costain, the Company’s founder, was born and brought up on the island before moving to Crosby in Liverpool in 1865, where he founded the company that still bears his name.

Together with William Kneen, he expanded the business until it was operating in both Lancashire and the Isle of Man, where the entrepreneurs bought tracts of land and built terrace houses on them, even recruiting masons and joiners from Arbory in the south of the island. It therefore gave Tony and Alex a real boost to meet members of the original Costain family on their walk.

“We were contacted by Derek, Hilary and Jennie Costain, all of whom are related to the original Costain family on the Isle of Man. We eventually met up with Hilary whilst we were on the Island and she showed a keen interest in how the Company is doing. It was great to meet her,” said Tony.

Alex added: “We chose the Isle of Man because of the Costain family connection and because the distance walked tied in with the 150 Challenge and Costain’s 150th Anniversary. We’re delighted to have done it in four days. The support from everyone has been brilliant,” said Alex.