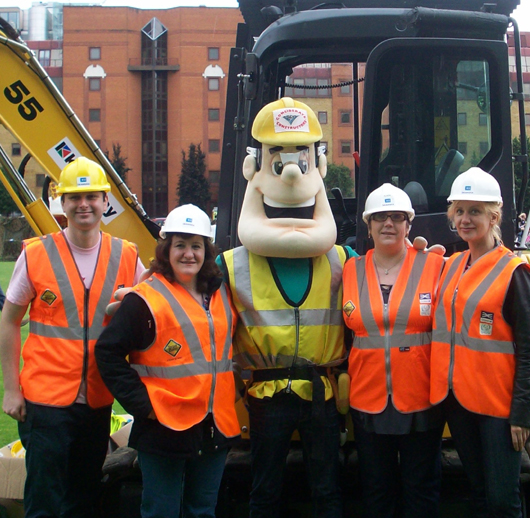 The children were attending a wishing party arranged by the charity Starlight at the Honourable Artillery Company in London. For one magical afternoon, the children and their families were able to escape to a wonderland inspired purely by their imaginations. From fashion to cowboys and action heroes; bouncy castles; cars, fire engines and a digger.

The JV team was on hand along with the Considerate Constructors Scheme to give these children their first induction into the construction industry. They were provided with their own sets off PPE and given the opportunity to pretend to operate the five tonne mini excavator with some guidance from the team, which included Alison Kendall, Elena Angelova, James York, Luc Williams and Nuha Behnam.

The Paddington team was invited to attend the day by Starlight (the project's chosen charity for 2012) and called on the supply chain to lend a hand. In particular Keltbray kindly supplied the mini excavator, which allowed many of the children a once in a life opportunity, of which they adored and in fact some were very upset when mum and dad tried to drag them away.

James York, Community Relations Manager, said: “The day was a resounding success for all involved and was deeply moving for the team to see these very ill children and their brothers and sisters experiencing a day they will never forget.”

Charlotte Webster of Starlight said when thanking the project for its help: “What a day!!  Not only did you make a very generous contribution to the overall party with the amazing digger, hard hats and high viz - all of which the children loved - but you also made a huge difference by helping us look after your area, and for kindly helping us the night before to set up the event."

It was also encouraging for a male dominated industry that she noted: “Every child that came absolutely adored getting on and off the digger and in fact I saw more girls than boys!”

Starlight brightens the lives of seriously and terminally ill children by granting them once-in-a-lifetime wishes and providing entertainment for children in hospitals and hospices throughout the United Kingdom.