Early opening announced for the A14, a joint venture project with Costain, Skanska and Balfour Beatty 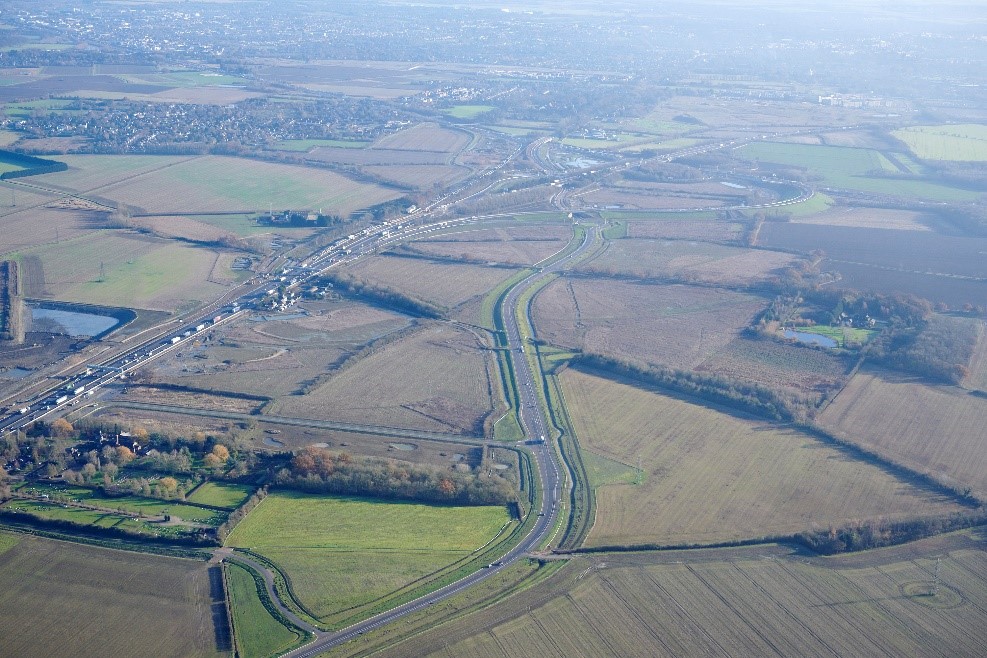 Britain’s biggest road project, the A14, a joint venture between Costain, Skanska and Balfour Beatty, is set to open to drivers more than half a year early, Highways England announced today (Thursday 6 February).

The £1.5 billion scheme to improve journeys between the East of England and the Midlands was originally planned to open to traffic by the end of 2020.
Today, Highways England said it plans to open the A14 improvement ahead of schedule this spring.

The good news follows the recent December opening of a part of the 21-mile scheme – a new 12-mile bypass south of Huntingdon – a whole year early. Already, the bypass has been used to make more than five million journeys.

Highways England chief executive Jim O’Sullivan said: “The A14 is a vital route used by 85,000 drivers every day and including more than 21,000 hauliers transporting essential goods around the country.

“Opening this scheme more than six months early and on budget shows what the UK construction industry can achieve working with Highways England on the Strategic Road Network. I would like to thank them for their focus on our joint success and for their one team approach.

“Also, I would like to thank road users, residents and stakeholders for their patience and support during our work. This road is not just a piece of national infrastructure - it brings benefits to the region and local towns and communities too.”

Roads Minister Baroness Vere said: “I’m delighted that the A14 upgrade will open ahead of schedule, not only meaning drivers will benefit from quicker and safer journeys sooner, but also ensuring that key access between the region’s ports and the West Midlands will be boosted.

“Investing in key transport links such as this is part of this Government’s plan to level up access across the country, ensuring all regions are better connected and improving journeys for all.”

Richard Stuart, Costain sector director, highways said: “Through collaboration, integrated working and visionary leadership, we have achieved a great outcome for Highways England’s customers by delivering the UK’s biggest road upgrade to budget and ahead of schedule. Costain is helping to shape the UK’s transportation landscape.  This has been an exemplar project and should set the model for other major infrastructure projects to follow and build on.”

Work on the project began in November 2016, and has employed around 13,000 people in total, with up to 2,500 working on site during the project’s peak who have been working hard to deliver an early opening for traffic on the new A14.

The A14 has changed the shape of infrastructure with archaeological, digital and sustainable development.

The A14 has been at the cutting edge of using digitalisation and new technology to deliver more effective, safer and sustainable solutions.

The project team has developed programming skills to create Smart Permit to Dig (SPtD), a web-based permit platform which manages utility asset information and helps operatives to carry out construction activities in a way that enhances safety and value.

One of the biggest challenges on the project has been proactively managing more than 500km of new and existing underground services, which can generate up to 1000 permits to dig per month.

The project efficiency team has calculated total savings of over £2.2m; that equates to more than £1m each year since its implementation, through process efficiencies alone.

The A14 includes 70 structures, and the team had to consider how to plan and design around them. The team has been using SiteVision to provide real-time, in-field visualisation of the new routes and structures. The software can depict models with accuracy within a few centimetres. SiteVision also brings immediate value and efficiency by linking to precise utility location information. This brings greater accuracy and reduces time and cost that would be spent locating and protecting buried assets.

Partners Costain, Skanska and Balfour Beatty have taken environmental commitments seriously, and has planted two trees for every one that had to be removed for the new road to be built, resulting in around 900,000 trees and shrubs being planted.

Further environmental work has seen the team care for ten protected species, including creating new habitats, such as for water voles.

The team has reduced the environmental impact of the project and improved sustainability by using local materials, with soil extracted from seven pits along the scheme used to form the embankments keeping the new road above the floodplain.

To date the team has carefully moved ten million tonnes of earth, with trained excavator operators who understand the archaeological impact of the work they carried out. This has not slowed them down, with the total amount of earth moved equivalent to around four Great Pyramids of Giza.

The A14 project has involved one of the biggest, most complex archaeological projects ever undertaken in the UK. Finds have included three Anglo Saxon villages, an abandoned medieval village, 100,000-year-old woolly mammoth tusks and a woolly rhino skull, a Roman supply depot and rare Roman coins from the third century. Around 250 archaeologists from MOLA Headland Infrastructure investigated 33 sites across 360 hectares.