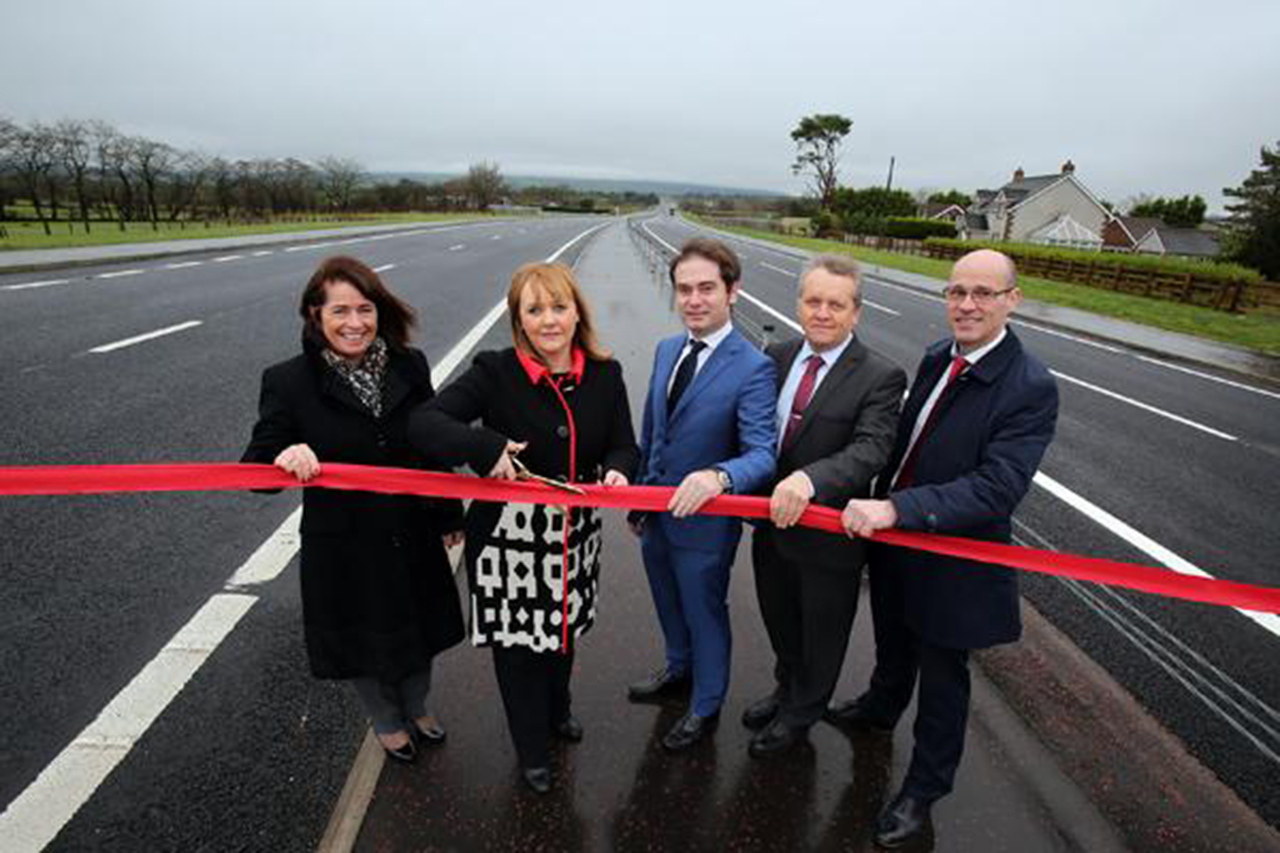 An improved road, delivered by a Costain-Lagan-Ferrovial jv, is significantly cutting journey times in Northern Ireland.

Traffic is now flowing along the newly-dualled A8 Belfast to Larne road following the official opening of the route by Northern Ireland’s Transport Minister Michelle McIlveen.

The jv’s work involved upgrading the A8 by creating 14.4km of dual carriageway, including 9km of online widening and 5km of off-line bypasses on the busy road, which skirted the villages of Bruslee and Ballynure.

“In just 34 months since the first sod was cut on this ambitious investment scheme around 17,000 drivers on average every day are now benefiting from reduced journey time of up to 25%,” said Minister McIlveen.”This is a significant reduction, especially for commercial traffic using the port of Larne.”

The job included creating 12km of side road realignments and improvements, together with the same length of accommodation laneways and access tracks. It also involved the creation of five grade separated interchanges and more than 60 culverts, many of them within ecologically-sensitive areas. A particular concern to the team was to prevent any pollution of nearby waterways, including several stretches popular with anglers.

The jv brought together Costain’s expertise in Early Contractor Involvement and the experience of Lagan Construction and Ferrovial Agroman in delivering large road projects in Northern Ireland. This project upgraded the final stretch of the A8 between Belfast and the Port of Larne.

Work got underway in August 2012 and involved upgrading the route between the B94 near Ballyclare and the A36 south of the Port of Larne. The A8 is an economically important road that carries more than 17,000 vehicles daily.

On the employment front, the contract saw 10 apprentices taken on to approved training programmes and more than 500 training weeks were undertaken for long-term unemployed in the area. Five people were given full-time employment as a result of the latter training activity.

The work, for the Department for Regional Development Transport NI, was valued at £133 million. The scheme was one of the largest investments in the province’s roads infrastructure in recent years and was funded by the Northern Ireland Executive with support from the European Commission and the Government of the Irish Republic.