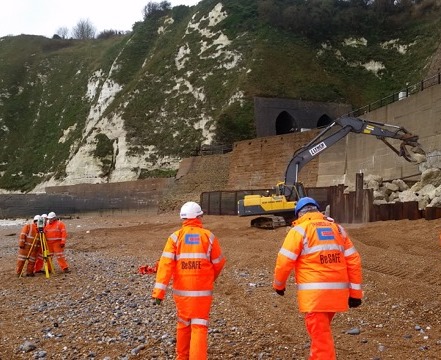 The Costain Kent Multifunctional Framework (MFF) team reacted swiftly and effectively when huge cracks appeared in the sea wall next to a railway near Dover Harbour.

All rail services between Dover and Folkestone were cancelled when large sink holes appeared next to the track on Christmas Eve. Cracks in the 10m high sea wall appeared on Boxing Day. The Christmas break was cancelled for 25 members of the MFF team who were quickly mobilised to assess the situation and formulate a plan of recovery with Network Rail. They battled strong winds, 10m high waves and high tides to assess the damage and make the site safe.

Said Andy Clarke, Costain Project Director: “This was never going to be a quick fix – it is a major infrastructure engineering project that requires working inter-tidal, two shifts per day, seven days a week. We looked at the lessons learned when the railway line at Dawlish was washed away by storms two years ago. However this was always going to be a much bigger engineering issue.”

It’s high profile too: the site has had visits from the two local MPs, the Secretary of State for Transport Patrick McLoughlin, BBC television news and Mark Carne, Network Rail Chief Executive.

Commented Simon Dunbar, Works Manager for the Dover Project: “We were fortunate to have such a good crop of skilled and experienced people to choose from on the MFF project. Right from the start everyone knew the challenges that we faced and that we had to be creative when it came to thinking of ways to manage the logistical and planning aspects of the job. We worked very closely and quickly with representatives from Network Rail and our supply chain partners to establish and agree plans for the project.

“We have two cargo ships transporting the lava rock from Norway with each boulder weighing in the region of three to six tonnes. It takes nine days for each ship to unload, using a 65 tonne excavator, and it then travels back to Norway for the next load. Over the lifetime of the project we expect to ship 70,000 tonnes of quarried lava rock from Norway to Dover. A challenge that we have to work around is that we can only unload the rock at high tides when the ship rises up the quay to the level where the excavator can move the rock to waiting dumper trucks. Working with tidal restrictions means that we can only unload twice a day, so we have to do as much as we can when we have the opportunity.”

The excavator unloads each boulder on to a 30 tonne dumper truck with flotation tyres. The trucks then transport the boulders across the length of the shingle beach and unload it. A 50 tonne excavator on the beach then moves the boulders to create a temporary breakwater, about 10 m in front of the failing concrete wall; this lessens the impact of each wave before it reaches the wall. These rocks will be moved to form the finished rock armour wall when the final design is in place. Currently a fifth of the structure, which looks to be the weakest part, is pinned back by sheet piling and limestone rock that was moved by road over the Christmas break.

Said Simon: “Each truck can carry around five to six boulders at a time, or around 30 tonnes in weight. To make sure that we can reinforce the structure as safely and quickly as possible, we work 24-hour shift patterns - weather and tides permitting of course - so that’s a fair few trips across the beach every day. In order to keep the structure secure we need to shore-up the entire length of the concrete wall with sheet piling and lava rock, that’s around 350 m.”

The team have also had to demolish a footbridge, as well as carry out earthworks to remove downward facing pressure on the wall. The spoil and the remains of the bridge, along with old timber sleepers and industrial waste, were taken away for processing using 20 wagons. Added Simon: “Network Rail managed the possessions and timetables for that, which was very useful in moving things along quickly so that we could look at starting to secure the inner workings of the concrete structure.”

Concluded Andy Clarke: “Our ability to be agile and reactive to quickly meet the needs of a key customer has been proven on many Costain projects up and down the country through the years. I am certain that when we come to look back at this project in a year, we will see an exemplar in the rail industry of tenacity, innovation, quality and the rich skill sets and experience that our people possess.”