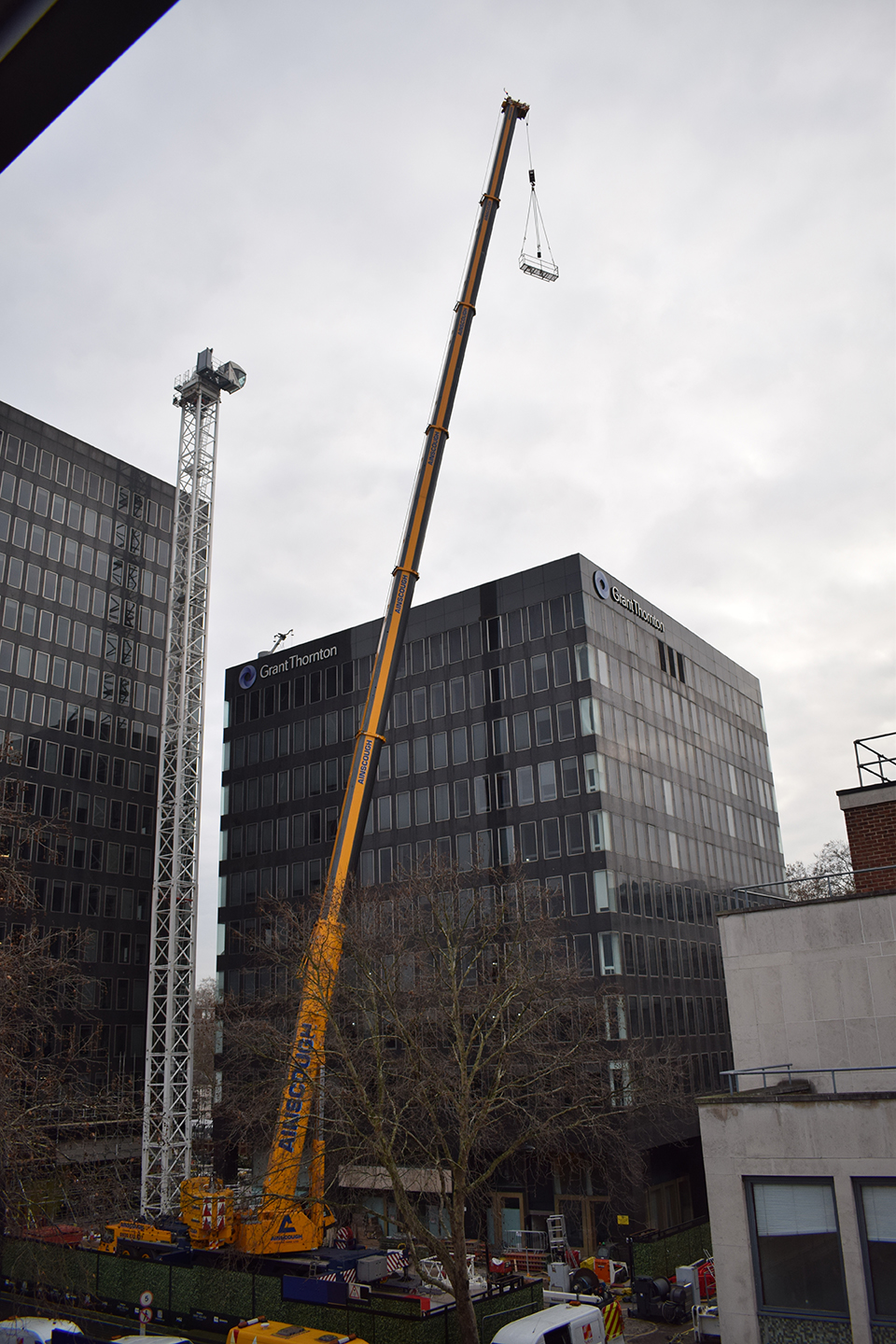 Work to transform Euston station and deliver extra capacity as part of the HS2 project has taken a very visible step forward, with the arrival, on the London skyline, of the project’s first tower cranes.

Delivered last week and assembled over four days, this 66m high crane is one of three in the Euston area and comes a week after the completion of the station’s new taxi rank, which opened to the public on Sunday 6th January.

Together, this progress allows HS2 to push ahead with the demolition of One Euston Square and Grant Thornton House, which stand above the entrance and exit to Euston’s old underground taxi rank.

Expected to take around 10 months to complete, their demolition will be the biggest change to the Euston skyline for almost fifty years. HS2’s early works contractor, a Costain and Skanska joint venture (CSjv), working with expert subcontractors McGee, are already hard at work, stripping out the interiors and erecting the scaffolding that will support acoustic screening around the buildings.

The screening, designed to limit noise and dust, will cover the two 1970s towers, with 93% of the material from the building set to be recycled or reused. The demolition itself will happen floor by floor, with waste material removed via the building’s lift shafts.

“HS2 will transform Euston, delivering much-needed extra capacity and better journeys for the 44 million people who use the station every year. We are already hard at work, delivering essential pre-construction work, including archaeology, utility diversions and of course, the demolition of the two Euston towers.

“The opening of the new taxi rank and the delivery of the project’s first tower crane is a significant milestone for HS2 and I would like to thank everyone involved in making it happen.”

“Costain and Skanska have successfully delivered many major infrastructure projects and are pleased to be delivering the HS2 enabling works programme in London. Our work continues to gather pace and constructing this temporary taxi rank to replace the underground taxi rank is vital to allow us to demolish the two large office towers at Euston.”

Over the last eight months, HS2 has also been working with TfL and Network Rail to deliver a new taxi rank in front of the station.

The new rank, which has capacity for around 40 vehicles, has been designed to incorporate as many of the existing trees as possible, with special measures including permeable pavement and root protection in place.

The taxi rank will be in use while HS2 construction work at Euston is ongoing. Taxis will ultimately move to a new location once construction is complete.

Ultimately, HS2 will more than double the number of seats out of Euston during peak hours and free up space on the west coast mainline for more local and long distance commuter services to places like Watford, Northampton and Milton Keynes.