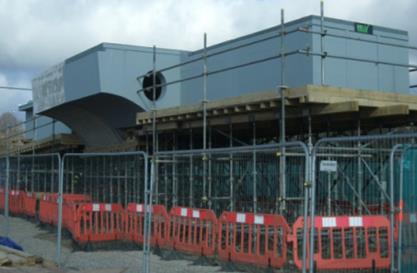 On behalf of Transport for London (TfL), the project team leading on the Hammersmith Flyover strengthening and refurbishment works (a Costain project) received the Chartered Institution of Highways & Transportation (CIHT)/Ringway Innovation Award at the CIHT Awards 2015 ceremony at the capital’s Landmark London Hotel.

The flyover, which opened in 1961, is a pre-cast, post-tensioned structure that carries 70,000 vehicles a day. Just prior to the 2012 Olympics, inspections discovered severe corrosion of the pre-stressing strands throughout the structure. Their deterioration was affecting its load-bearing ability.

The aim of the strengthening and refurbishment is to extend the flyover’s serviceable life, while minimising both whole-life costs and disruption to traffic and the local community in doing so.

The initial plan was to install a replacement post-tensioning (PT) system inside the flyover’s hollow structure. However, it became apparent that this solution would not work, due to the amount of additional pre-stressing force required and internal space constraints.

Instead, during TfL’s Early Contractor Involvement stage of the contract, the design developed into a series of short, PT systems outside the structure, with specialist PT subcontractor Freyssinet adapting its stay cable system known as Plug & Play.

This process has required tendon anchors, or ‘blisters’ made from ultra-high performance fibre-reinforced concrete to be placed on the flyover’s external webs, which supplement a long tendon system running inside its entire length. The short tendon system was the first application of its type in the UK. The Plug & Play system reduced the work at height and no grouting or waxing was required to the tendons.

It also reduced the programme of works by 10 days, saving £330,000 and requiring 15 fewer road or lane closures than would otherwise have been necessary.

The Integrated team, including the supply chain, embraced innovative technology and materials as part of the strengthening solution.

To train the project personnel in both the construction methodologies and emergency scenarios, a full-scale mock-up of a section of the flyover was built, to allow training in the bespoke equipment that would be required for the job.

This specially-designed lifting and concrete placement equipment has significantly reduced the amount of working at height by eliminating the use of scaffolding as much as possible.

This project also benefited from using the Building Information Modelling digital system throughout the design and construction process. This meant all parties could share a common data environment.

The outcome is a structure that will continue to serve London for decades while needing less maintenance. This, in turn, will require less future spending and further reduce disruption to the community.

Pictured: The team working on the Hammersmith Flyover project constructed a mock-up section of the structure, to allow training on the bespoke tools that were needed for the project.