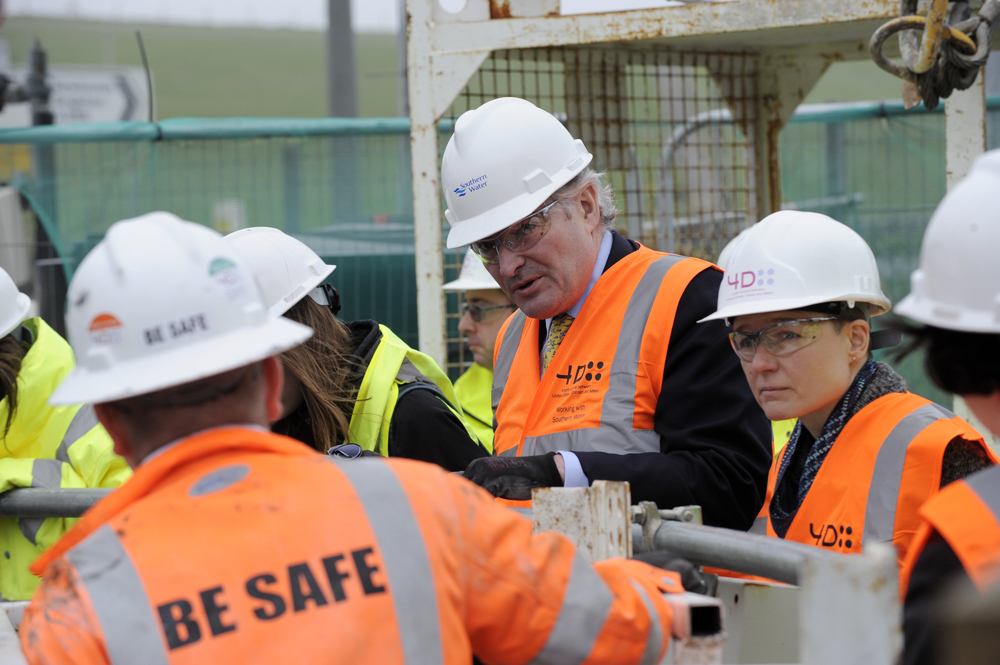 Work on minimising the amount of waste generated on the project to bring cleaner seas to Sussex, has been so successful that it has attracted Government attention.

Lord Henley, Parliamentary Under-Secretary of State for the Environment, will visit the project on 31 March to learn how 98% of the waste created has been diverted from landfill sites. A particular aim has been to find disposal options for the chalk that is being excavated during the project.

Southern Water’s £300 million environmental improvement scheme being delivered by 4Delivery (4D), the joint venture that combines Costain with Veolia Water and MWH, is designed to bring cleaner seas to Sussex by next year.

A combination of 11km of new sewer tunnel, three new pumping stations and a new wastewater treatment works at Peacehaven, east of Brighton, will see the wastewater fully treated and then dispersed at sea through a new 2.5km long sea outfall.

4D suggested to Pathway to Zero Waste, a Government entity with links to the Environment Agency, that a visit could be organised to a construction site where the ‘zero waste to landfill’ ethos was being successfully put into practice.  Lord Henley’s planned trip was the result.

According to Rachel Jackson, 4D’s Environmental Advisor on the project: “The question we ask is: ‘Could one man’s waste be a resource for somebody else?’”.

Considerable excavation and tunnelling work is required on the project and has produced more than one million m³ of chalk. “We’ve been looking at ways we can re-use the chalk on other sites,” says Jackson.

“Chalk from the tunnels is going to farmers’ fields where it can be mixed into the soil and used to change the Ph balance. It’s also being used for hard-standings or access roads. Chalk on the main site at Peacehaven is staying on-site and used as landscaping.” The wastewater treatment works lie in a natural fold in the landscape and will be given a grass roof so the buildings blend into the downland setting and retain the views of the Downs.

Further use of the chalk is now being made by sending it to a cement works for the production of cement.

Additional waste reduction comes through chipping waste wood that is used as fuel for a local wood-burning generator to produce electricity.

During his 90-minute visit, site personnel will take Lord Henley to the Ovingdean tunnelling site where he can see the excavated chalk being handled.