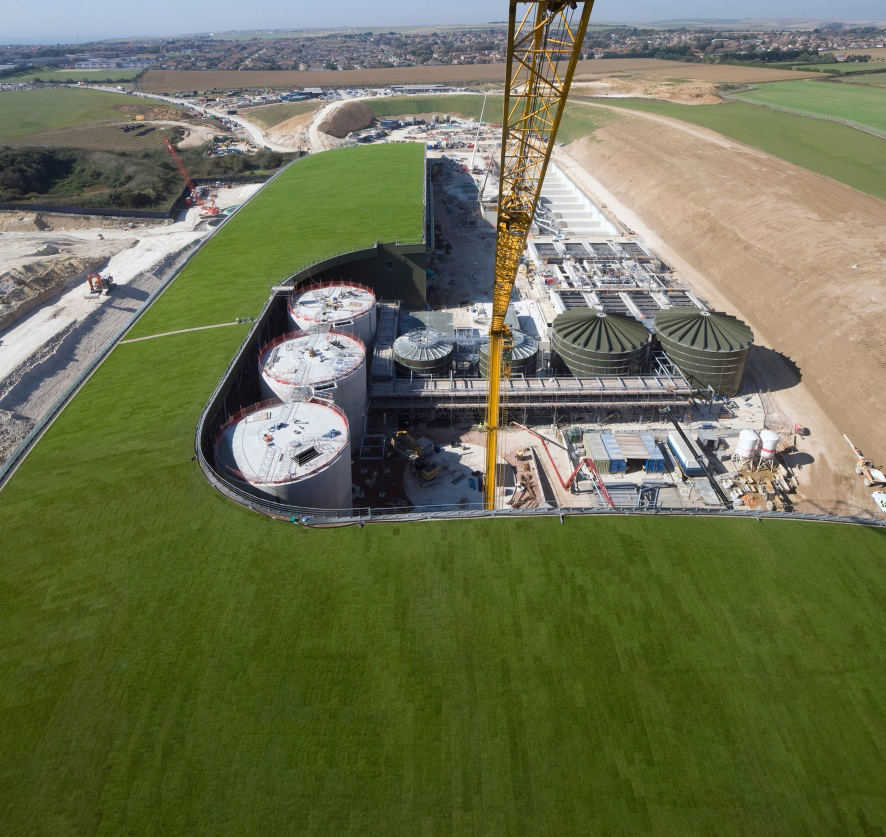 The scheme is Southern Water’s largest ever project and includes 11km of new sewer tunnel, two pumping stations, a wastewater treatment works and a 2.5km long sea outfall. The scheme ensures that the 95 million litres of wastewater produced each day by people in Peacehaven, Telscombe Cliffs, Saltdean, Rottingdean, Ovingdean and Brighton and Hove is treated to EU standards.

The new treatment works at Peacehaven is covered by a green roof equivalent in size to three football pitches, and is one of the largest in Europe, planted with downland grasses to help it blend into the surrounding landscape.

At Peacehaven alone, more than one million cubic metres of earth was moved, all of which was reused on site as part of the extensive landscaping. The treatment works cover just one third of the construction site, the rest having been returned to agricultural land and a new park for the community.

MP for Brighton Kemptown and Peacehaven, Simon Kirby, was among guests taken on a tour of the Peacehaven works to mark the opening.

He said: “This project is a remarkable feat of engineering. Peacehaven is a quarter of my constituency and I’m pleased that Southern Water has recognised the strong sense of community here. The company has worked with the councillors, with me as MP and with the residents to make sure that during the construction of this engineering achievement, the intrusion has been minimised.”

Other guests included Margaret Paren, Chairman of the Southern Downs National Park Authority, who described the new treatment works as a “fantastic facility” and particularly praised the use of downland grass on the roof.

Richard Hodgson, Southern Water’s Project Manager for the scheme, said: “Thanks must also go to everyone who has worked on this scheme, whether in its planning, design, construction or operation. The team, including everyone who works for our supplier 4Delivery and the various specialist sub-contractors brought in, has been superb and helped deliver our biggest ever scheme on time and on budget.”

Graham Sugrue, Costain’s Project Director, said: “I am delighted to have been involved in this project. When I first came here in 2009 it was just a field and to see the final product now gives me a real sense of personal achievement. Through all the challenges we encountered along the way, including objections from local residents and the severe snow in January 2010, it was essential that 4Delivery worked collaboratively with Southern Water to resolve the issues whilst minimising the impact on the programme.”

Costain’s Water Sector Director, Matt Crabtree, added: “I would like to congratulate Southern Water on its vision that has enabled this magnificent project. Working together, the Southern Water and 4D team has delivered an Award Winning scheme that not only blends in with the physical environment, but thanks to the team’s efforts, has been done in partnership with the local community.”

The scheme was recently named Major Civil Engineering Project of the Year at the British Construction Industry Awards, beating other entries including The London 2012 Olympic Park Project.