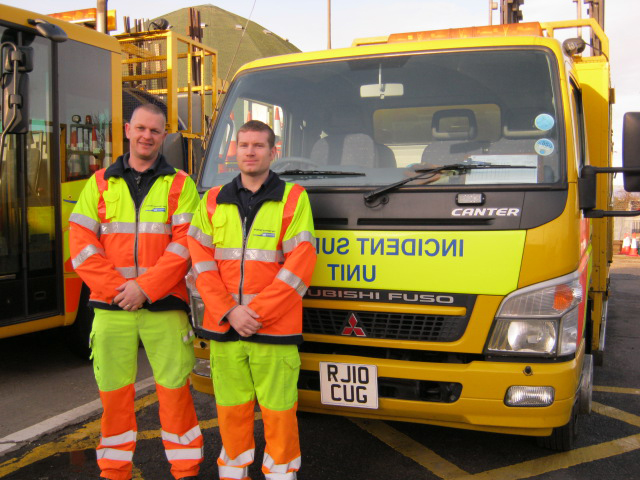 Two heroic AOne+ employees have been praised by Northampton Police and the Highways Agency for rescuing a driver trapped inside a burning car on the A45.

Richie Stripp and Tony Austin work for AONE+, a joint venture between Costain, Colas and Halcrow, which maintains motorways and major trunk roads in the East Midlands on behalf of the Highways Agency.

Richie and Tony were returning from a repair job when they came across the accident near Wootton Junction, in Northamptonshire.

“There were several members of the public already on the scene and clearly panicking about what to do. When we arrived in our maintenance vehicle and high-viz clothing, all eyes turned to us for assistance,” said Richie.

Before they knew what was happening the car set on fire with the dazed driver still trapped inside.

“Neither of us gave it a second thought; we just knew instinctively that we had to get the driver out and move the onlookers away from the incident in case the vehicle exploded,” Richie said.

Tony added: “Once we had got the driver safely out of the car, we also closed the slip road using the cones on our vehicle to stop other motorists coming to harm and also to allow the emergency services to get immediate access to the scene once they arrived.”

The driver of the vehicle, who wishes to remain anonymous, has expressed his sincere gratitude to Richie and Tony.

“Immediately and without regard for their own safety, the crew went to the burning car and between them got the driver out, consciously asking what injuries he had sustained.

“The driver was having a medical episode and was unable to help himself. When he finally came round he had no recollection of what had happened and where he was.

“Not only did they rescue the driver but they also managed to keep the public back and close the slip road prior to us arriving with the fire service, thus keeping others safe as well.

“If Richie and Tony had of not acted in such a fashion, it may have become a fatality.”

“Richie and Tony showed exceptional courage and we highly commend their actions which not only saved the motorists life, but also prevented others from coming to harm.”