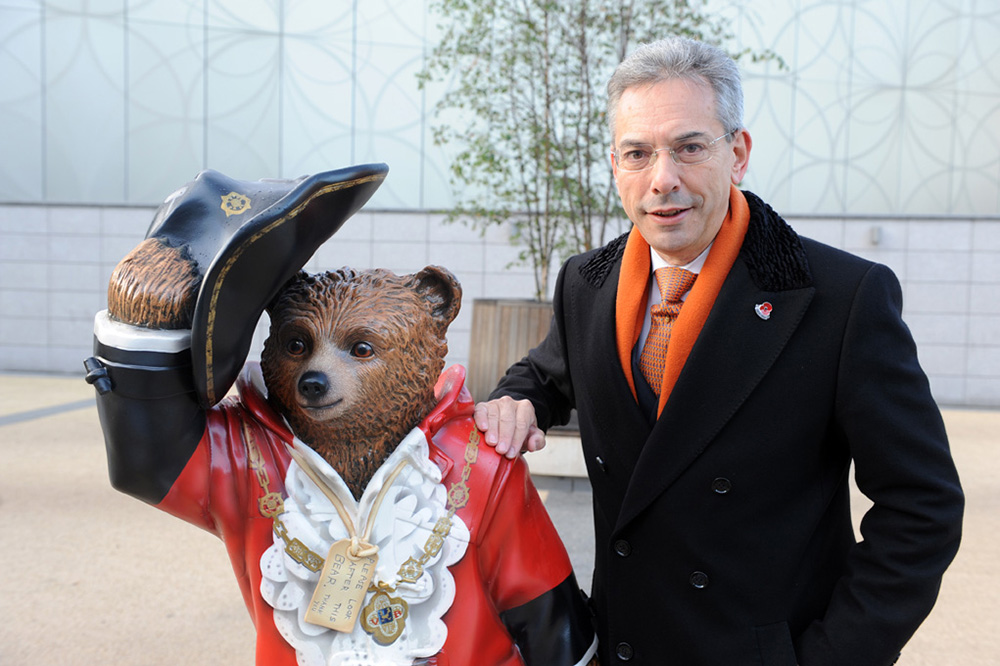 A Costain Skanska joint venture (JV) has come to the aid of a three foot tall bear which arrived from deepest darkest Peru with only his suitcase, containing an almost empty jar of marmalade.

The bear known as Paddington has been given lodgings, found his bearings and is now 'supervising' the construction of Crossrail’s new Paddington underground station.

The three foot six inches tall statue of Michael Bond’s famous Paddington Bear is one of 50 that make up The Paddington Trail and is located outside the canal entrance to Paddington Station. Costain Skanska JV jointly adopted one of the bears with The Paddington Partnership to mark the release of The Paddington Movie in UK cinemas in November 2014. The Paddington Trail has been put together by the NSPCC, VisitLondon.com and STUDIOCANAL and features 50 statues designed by celebrities and artists that have been placed across London. The statues will be auctioned online to raise vital funds for the NSPCC and its ChildLine service from 10 December at Christie's. For more information on The Paddington Trail click here.

The Paddington area will welcome eight statues in total with designers including author Michael Bond, TV presenter Jonathan Ross, fashion designer Lulu Guinness and artist Hannah Warren. The bear adopted by the joint venture was designed by Deputy Leader of Westminster City Council, Councillor Robert Davis and is in the traditional livery of the Mayor of Paddington.

James York, Senior Community Relations Manager, said: “Adopting one of the bears presents us with a great opportunity to promote the Paddington area and the work of the JV in constructing the Crossrail station at Paddington. We hope that the trail will attract additional tourism which will in turn benefit local business. There is also the added bonus that the bears will be auctioned for charity NSPCC.”

Kay Buxton, Chief Executive, The Paddington Partnership, says: “With Paddington the inspiration for Michael Bond’s world famous Peruvian explorer, it is only fitting that this lovable Bear should now be encouraging visitors to explore all Paddington has to offer beyond the historic Station.”

To see the bear in all his glory at Paddington watch here.