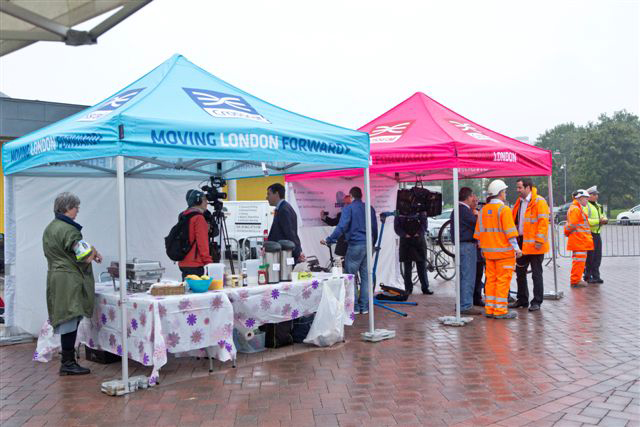 Two of CSJV’s subcontractors, Gordon and O’Donovan Waste Disposal, parked their heavy goods vehicles in the leisure centre coach parking bays created by CSJV as part of the contract enabling works. Visitors were then given the opportunity to sit in the driver’s seat to get a better understanding of what a lorry driver can and can’t see from their cab and where vehicle blind spots exist.

“The aim of the day was to raise awareness of safety requirements for vehicles, cyclists and pedestrians. Cyclists had free security marking, bicycle safety checks and hi-vis giveaways.  The day was a great success and everyone went away with a better understanding of the dangers associated with cycling on roads close to construction vehicles,” said Martin Griffiths, Costain Community Relations Manager working for CSJV on the Eleanor Street &amp; Mile End Shafts (Crossrail C360).

Crossrail is leading the industry in heavy goods vehicle safety by requiring haulage contractors to fit additional safety equipment to their vehicles and for their regular drivers to undergo a one day training course. Crossrail’s road safety initiatives have the full support of all its principal contractors, including CSJV, who are fully committed to helping make London’s roads safer.

As a responsible company, Costain has also implemented a vulnerable road user’s initiative to tackle this key issue.

The Company recently launched, and is implementing over the next 12 months, specific safety standards for vehicles travelling to and from its projects. The standards specify minimum requirements for driver competence and include safety measures that ensure the Company selects the safest travel route to and from the sites, minimising as much as possible the interface between construction vehicles and vulnerable road users.

The Company is also an active member of the Transport for London sub working group which is putting together a common code of practice that aims to encourage the wider adoption of best practice in construction logistics and cycle safety across industry.

“The Exchanging Places event highlighted the real dangers for cyclists and pedestrians on our roads, particularly in the centre of London where so much construction work is taking place, and the efforts being made by our industry to improve driver vision around their vehicles,” said Darren James, Costain’s Managing Director for Infrastructure, who was on site to give his support as part of a SHE Leadership Impact Day.