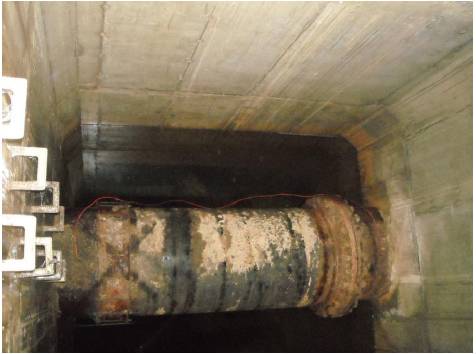 A joint team of Costain, MWH and Severn Trent Water staff has successfully completed work to ensure the resilience of a pumping station that ultimately supplies water to Severn Trent customers.

Wyelands Pumping Station in Gloucester extracts raw water from the River Wye, which is then pumped to Mitcheldean Water Treatment Works (WTW). The WTW and the pumping station were constructed in the 1970s and pieces of critical infrastructure needed to be replaced.

The pumping station serves Mitcheldean and a failure there could have resulted in a loss of water supply to customers.

In spring 2012 work was carried out at Wyelands to replace a failed gasket on one of the valves. The valve was replaced with a spool piece.

It was not possible to re-insert a new valve between existing flanges because the original installation did not include a dismantling joint. This meant that necessary maintenance work on the high lift pump delivery valves could not be carried out without a full drain down of the pipe main carrying water to Mitcheldean; an operation that could take around 15 hours and put domestic water supplies at risk.

The team spent many months planning and preparing to install a new valve, dismantling joint and flexible couplings that would enable future removal of the valve and ease of maintenance, without risking loss of water to customers.

Installation began on 3 June, after all service reservoirs served by Mitcheldean had been filled to capacity. The pumping main was drained down early on 4 June to allow work to begin in earnest. The old pipe was removed and the new valve installed. By 6pm that day the team began recharging the water main using temporary pumps and full flow to Mitcheldean was restored early on 5 June.

Commenting on the achievement, Severn Trent’s Service Delivery Manager, James Jesic, said: “The work over the last few days was the culmination of hard work, careful planning and preparation; the result was a fantastically developed and executed plan, which has helped to mitigate a significant company risk.

“The dedication, commitment and team work shown by all members of the team from Costain MWH and partner contractors, Water Production, Distribution, COSC and Asset Creation has been exceptional.”