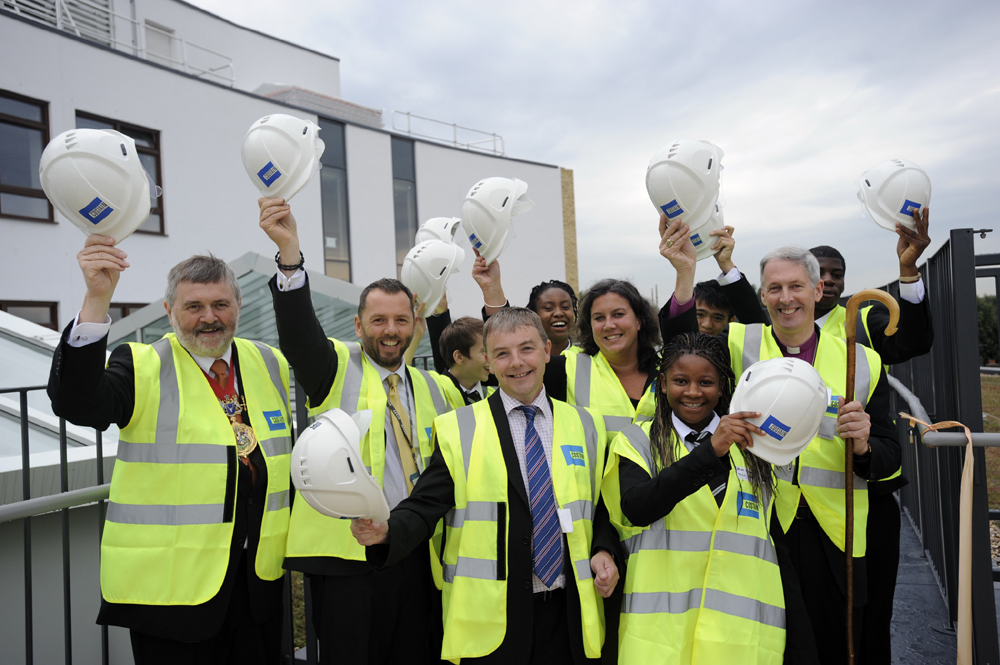 The latest school in Lewisham's Building Schools for the Future (BSF) programme has passed a major milestone and is heading rapidly towards completion.

Local council and church dignitaries were present for a topping-out ceremony at Trinity School, a Church of England secondary that will from next year be home to 600 pupils.

Stephen Wells, Group Strategy and Business Development Director, says the Group was delighted by the £18 million-plus building, which exceeded their expectations.

Trinity is the third of 11 schools being built in Lewisham by Costain. The project team moved on site in June 2009 and work got underway following the demolition of the former Northbrook School that occupied the site.

As with many inner-city schools, the site footprint is tight and little space is available for outdoor activities apart from a multi-games unit. This has resulted in the most unusual aspect of the new building, a second-floor open-air 'teaching deck' that can be used for lessons in good weather and which also acts as a recreational area for pupils during breaks.

"It's a paved area with glass balustrades and has a really nice aspect over the adjacent Manor House Park," explains Kraus.

"Trinity is a PFI design and construction project. Over the Christmas break we &nbsp;literally move all the equipment in from the old school to which they have been decanted while construction has been underway."

New furniture and IT equipment will be provided and installed, ready for use. That process will take place in December and over the Christmas break, with handover of the school due on 4 January 2011.

The end of 2010 will be a particularly busy period for the Costain team working on the Lewisham BSF, with no fewer than five further schools approaching Financial Close.