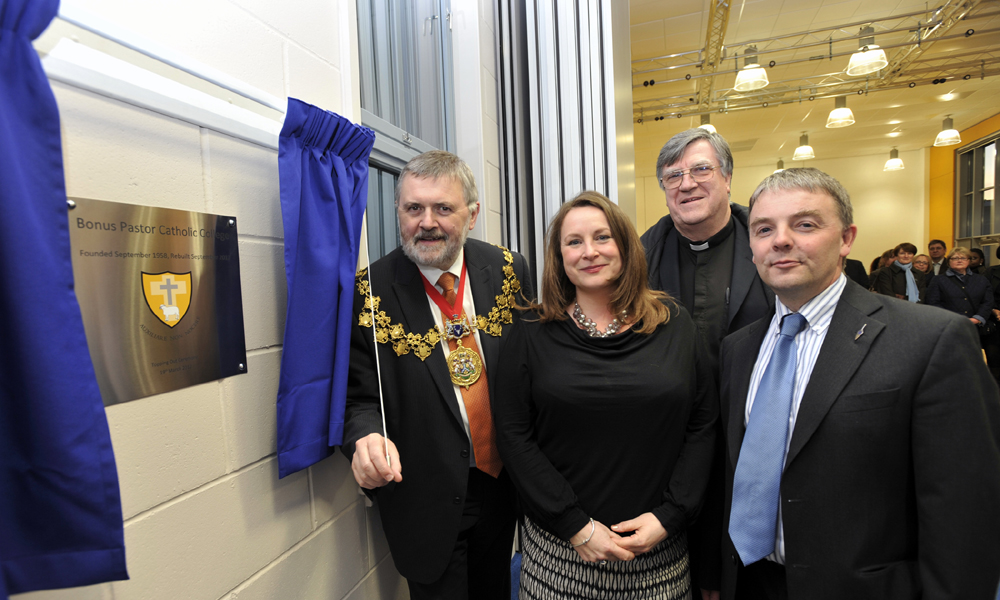 Costain has passed another milestone in its major school-building programme in Lewisham, south London, with the topping-out ceremony at Bonus Pastor Catholic College.

The ceremony was attended by the Mayor of Lewisham Sir Steve Bullock and the parish priest of Downham, Canon John Kavanagh. Bonus Pastor is the fifth school in Costain’s portfolio of 10 projects in the borough under the Building Schools for the Future project.

The ceremony, although billed as a topping-out, took the form of a plaque-laying in what will be the chapel of the 750-pupil school. In fact, Costain is already significantly into the secondary school’s construction programme, with around eight weeks to go until practical completion. It is due to be formally opened in May 2013.

The new Bonus Pastor College is split over two sites and is being built in the playgrounds of the school’s existing premises. When the new buildings are complete and occupied, the old premises will be demolished and the playgrounds reinstated.

The three-storey buildings consist of concrete frames with clad facades. The project is aiming to achieve a rating of Excellent for BREEAM sustainability; they will have ‘green’ and ‘brown’ roofs. The former will be covered in grass, while the latter will feature crushed recycled rubble.

Both schools back on to a woodland walk and Costain has been co-operating closely with Lewisham council’s Ecology Manager and school on a series of biodiversity measures, including the placement of bat boxes around the sites.

Among hurdles faced by Project Manager, Clive Kraus’s, team has been the location of the two sites in residential areas. This has led to restrictions being placed on vehicle movements in and out of the site at some times of day to minimise disruption to local householders and pupils moving between the two school sites during the day.