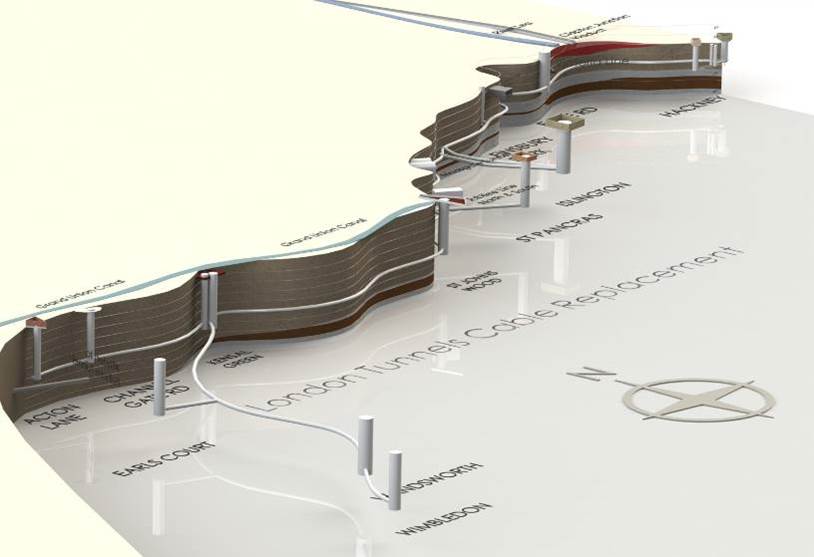 The LPT contract saw the jv partners tunnelling for some 32km under the capital, creating what client National Grid describes as an ‘electricity superhighway’ for high-voltage cables to provide increased resilience for the city’s power supplies.

When all aspects of the project are complete in 2018, it will help ensure that London’s growing demand for power can be met over the coming years.

The contract involved driving three major new tunnels under London, linking Hackney in the east with Willesden in the west and Wimbledon to the south, with 14 shafts along the route providing access from street level. This represented the longest single tunnelling contract ever let to a single contractor in London.

“All tunnelling has now been completed,” said Costain Agent Andrew Hudspith. “The headhouses that sit on each of the shafts are all constructed and we’re in the process of commissioning sections of the tunnel. There’s one section we can’t commission until next year, but we’re getting towards practical completion.”

The project saw two tunnel boring machines (TBMs) cutting their way through London’s varying strata at depths of up to 45 metres. Through engagement with local schools, competitions were held to allow pupils to name each machine, with Cleopatra and Evelyn selected as the winning entries.

“The project has provided its fair share of challenges,” said Andrew. “Like any undertaking of this level of complexity, there have been a few issues to solve through its life, but it’s been a very successful contract for Costain and Skanska.

The first section of the scheme was completed last year and will provide power to Crossrail when it comes into service.

“The project’s challenges were solved via a series of technical innovations, much of it involving prefabrication of multiple elements of the build, from tunnel and shaft segments to cover slabs and beams. Precast concrete staircases leading underground from the headhouses were also installed.”

The LPT project is seen as a major success story within National Grid. Costain has been the key contract partner for the project since 2010, constructing vital assets in challenging environments. The vast scale of the undertaking is sometimes easy to forget, with the 32km of tunnels crossing 37 existing tunnels. Work was completed without incident, with real innovation in managing and monitoring settlement yielding strong performance across the project. At the peak of the programme Costain was working across 12 London sites – each with its own challenges.

“There is a palpable sense of pride within the National Grid and Costain teams, both current and former, at what has been achieved. How it has been achieved with collaboration and innovation should also be celebrated,” said Nigel.