Look After My 'Daddy' 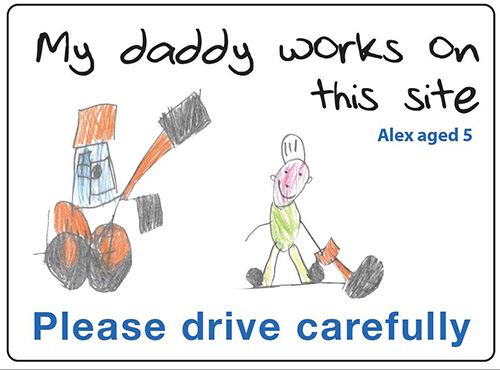 Costain has launched a Roadworker Safety Campaign on the M1 with the help of the children of site workers.

Staff and Operatives on the M1 J28-31 Project have set the children in their families an artistic challenge as part of a Road Worker Safety Campaign. The children were asked to draw a picture of their mother, father, uncle or auntie at work on the M1 Project. Three entrants were then chosen to have their artwork converted into signs erected by the side of the motorway warning motorists "My Daddy works on this site – please drive carefully".

The three talented winners whose pictures have been put on the signs were Alex, (aged  5) son of Steve Smith from Aggregate Industries, Holly (aged 9) whose uncle Philip Purvis is a Costain QS, and Liam (aged 5) son of Karl Auger, a Costain SHE Advisor. All of the entries have been displayed in the site offices and rewarded with a construction related toy and a Costain goody bag.

Richard Stuart, Costain’s Project Manager for the project said “We wanted to get the message across that there are many people with families working on the site whose safety depends on the behaviour of motorists. This was a way of communicating that message in a personal way at the same time as getting the kids more interested in construction.”