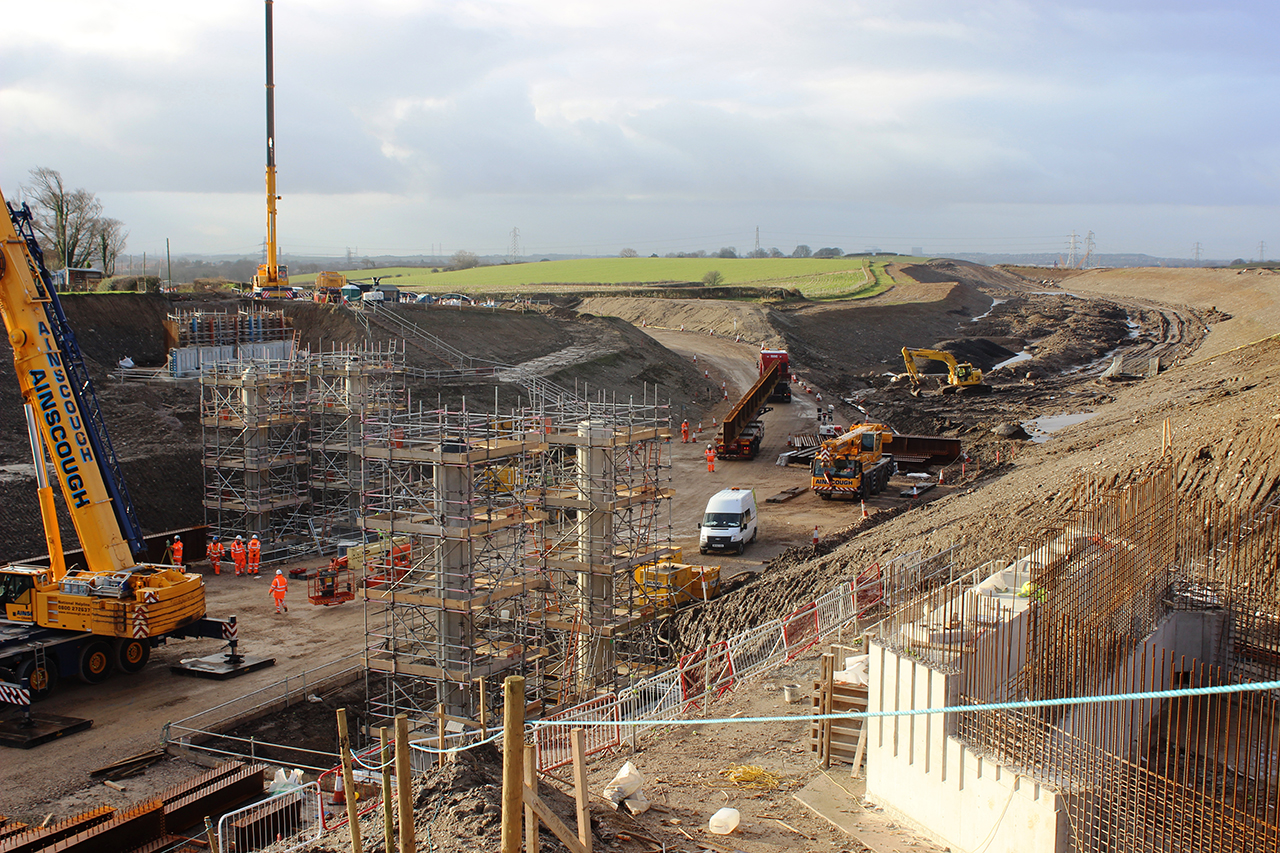 Major progress is now being seen on Costain’s Heysham to M6 Link Road project in Lancashire, as work continues rapidly on both roadworks and structures.

“We had a massively successful first year of earthworks, moving just over 1 million m³ of material, with around another 700,000m³ planned for this year. We really start to ramp that up into April,” said Community Relations Officer, Tom Horton.

“The structures are steadily going up at several locations, we have started to lay Tarmac at major junctions such as Morecambe Road and we’ve diverted over 20,000 metres of cables and pipes belonging to utility companies.”

Among the structures, eight 42-metre steel beams have been installed at the Folly railway bridge, which crosses the West Coast Main Line. Work on the bridge deck is now underway during a series of Saturday night possessions of the railway.

Additionally, a series of 30-metre pre-cast concrete spans have been installed over the Lancaster Canal for the new Milestone Canal Bridge, with backfill, a saddle and bridge deck next to be installed. The bridge will be the longest-span twin pre-cast arch beam bridge in the UK.

Most spectacular of the structures on the route will be the 211-metre Lune West Bridge, crossing the River Lune. Its reinforced substructure has been completed and the four-span bridge will eventually contain more than 2,300 tonnes of steelwork.

The steel beams for the Lune West Bridge are to be delivered in March for onsite fabrication before they are lifted into place by the end of May using one of the UK’s largest mobile cranes, a 1,200-tonne Gottwald AK-680-3. The crane itself is due to arrive on site in mid-April, together with as many as 45 wagonloads of components.

Once fabricated, the first four sections to be placed will certainly catch the eye, measuring 71.6 metres long by 1.5 metres wide and 4.1 metres high, weighing approximately 160 tonnes each.

The scheme is opening its doors for charity on Sunday 26th April 2015. The project team is hosting a ‘Welly Walk’, designed to show the community exactly what’s happening on site and how construction of the new road is being delivered, while raising money for a well-established local charity, St John’s Hospice, and The *Costain 150 Challenge.

The new £124.5m link road will connect the Heysham peninsula directly to the M6, providing better access to Morecambe and industrial areas which include the Port of Heysham and the Heysham power stations. It will also reduce congestion in the Lancaster area especially on Caton Road, Morecambe Road and the Greyhound and Skerton bridges.