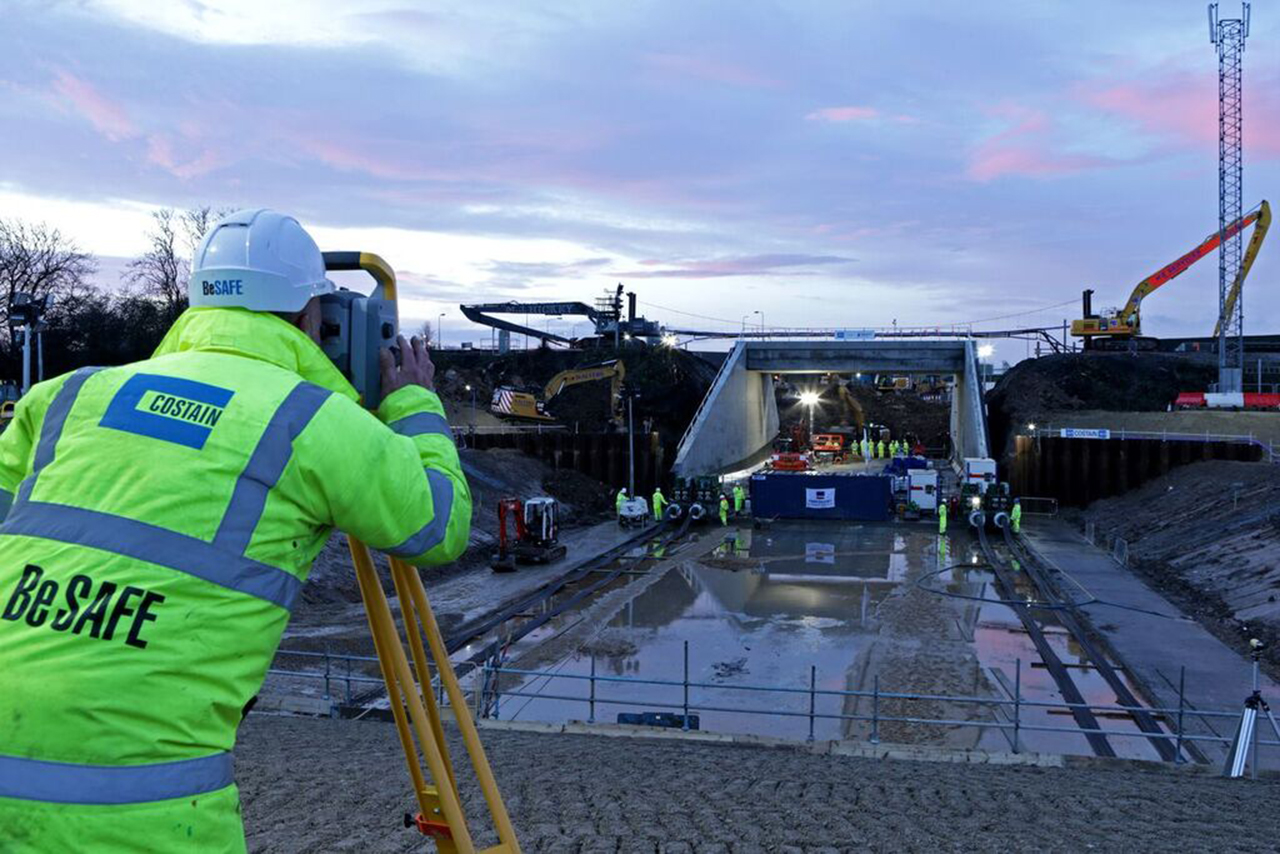 The Costain team working on the A160 Port of Immingham Improvement Scheme has completed a challenging feat of engineering - installing a new railway bridge on the UK’s busiest freight line.

The £88.4 million Scheme is being carried out on behalf of Highways England and involves upgrading 5km of the A160 from single carriageway to dual carriageway, and constructing a number of new structures, including the new bridge which had to be installed within a tight 76 hour window.

Work started at 2200 on Christmas Eve. The engineering team was led by Richard Pickup together with Costain Engineering Services and a team of specialist contractors including Walters, Freyssinet , Trackwork and SPI Appleton. In order for the installation to be completed within the designated time, the team planned the operation meticulously.

The bridge weighed in at just under 4000 tons and was slid into place using the Autofoncage method, which utilises four large strand jacks. These jacks push the bridge as they pull against the resistance of the strands, which are fixed into the guide raft and a thrust wall.

The team utilised 3D and 4D Building Information Modelling which allowed them to visualise, plan and share every piece of information with the wider team, clients and stakeholders.

In addition to the 4D modelling, the team also completed a Quantative Schedule Risk Assessment, which helped to identify key areas which needed special attention.

No major civil engineering project comes without its challenges and for this project the stability of the old rail embankment caused the biggest hurdle by extending the period the team needed to carefully backfill the structure. The team overcame this challenge and worked closely with Network Rail to manage the completion of the works within the allocated time.

“The bridge installation was a particularly challenging element of the works and required some outstanding planning and engineering. We worked very closely with Network Rail and Highways England and everyone on the project pulled together,” said Craig Snow, the Project Manager.

As well as carrying the country’s busiest freight railway line, the new bridge will allow the new highway link to pass underneath it. Knowing how important the bridge is to Highways England and Network Rail, the team installed real time time-lapse photography, which made the images available on the internet as they happened.

“We knew that every minute of the possession would be closely monitored so we were more than happy to share the images with all of the companies involved. This has been an excellent feat of engineering, without any incidents or accidents, and a project the team can be very proud to have been a part of,” said Craig.

To watch a video of the bridge being installed, please click on the link below: