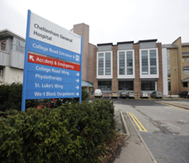 State-of-the-art facilities designed and built by Costain are coming into service at Cheltenham General Hospital as the Gloucestershire NHS Foundation Trust improves its services for its patients.

The £13.5million St Luke's Wing Phase 2 was officially opened in July, while a building housing a linear accelerator enhancing services for cancer treatment is due for completion in early September.

The four-storey St Luke's wing extension houses stroke and rehabilitation wards, plus an intensive care and high dependency unit. Project Manager Kevin Miners explained that the new structure was slotted into a gap between two existing buildings and then linked in to existing services all within an extremely tight area.

Working on a 'live' hospital site naturally meant minimising noise, dust and disruption, with much work on the 82-week job taking place at weekends and late at night. "There was a lot of close liaison with the hospital trust," says Kevin. "We were connecting to a lot of existing services, and had to break in to their live systems."

This meant, for example, giving the hospital ample warning that certain wards would have no water supply for specific periods as connections were made to the new building.

The second building, a two-storey structure housing a Linear Accelerator, features a concrete 'bunker' designed to house the accelerator, which emits radiation as it is used in cancer treatment.

Containing the radiation required special construction and methodology measures. "We built big concrete boxes, effectively, with walls up to 2.4 metres thick," explains Construction Manager Alex Garwood-Gowers. The concrete was of higher than normal density, achieved by adding magnetite, a type of iron oxide. The floor, walls and roof of the bunker each had to be completed in single pours, to prevent any joints that could allow radiation to leak.

Two pumps, plus one on standby, were used, and a second concrete plant was also placed at readiness to ensure supplies if problems arose at the primary facility. With only two concrete wagons able to get on to the tight site at any one time, the remainder were held offsite in a staging area and guided in by marshals as each wagon finished pumping its load.

Both buildings are built around steel frames, hollow rib decking and concrete slabs, with brick cladding and render facades.