Major Milestone For A14 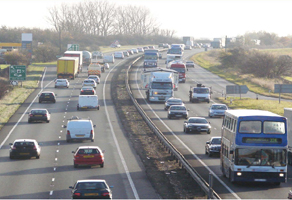 Twenty months after successfully bidding to revitalise one of the UK's busiest trunk roads, a Costain-Skanska joint venture has reached a major milestone in the A14 Contract.

The publishing of Draft Orders for the Ellington - Fen Ditton scheme, which calls for the joint venture to build the first section of 36km of road on the A14, "really sets the clock ticking", says Project Director Mark Berg.

The A14 stretches from Felixstowe Docks in Suffolk to the M1/M6 junction northwest of Northampton. The section, being tackled by Costain-Skanska, runs through countryside roughly from Huntingdon to Cambridge.

The project is designed to relieve heavy congestion on the route. Some new sections of road will be built off-line from the existing A14, others will run parallel to it and some will see the existing road expanded.

One major interchange is "almost like Spaghetti Junction" in its scale and complexity, says Mark Berg. Other sections of the road will require bridges to be demolished (including one straddling the East Coast Main Line rail route) and two new structures built across the rivers Ouse and Cam.

A few statistics from the past 20 months show the scale of the challenge:

•&nbsp;7869 drawings were created;
•&nbsp;nearly 640 people were involved at some stage, as were 35 different offices;
•&nbsp;almost 300 meetings were held with local councils, businesses and landowners;
•&nbsp;in total, 12,662 documents were produced.

The publishing of the Draft Orders is a significant stage in the statutory process. A public enquiry is due to be held in June 2010. It is anticipated that, if the go-ahead is given, work will start in spring 2012 and be completed in late 2015.