Major Milestone Reached On The A556 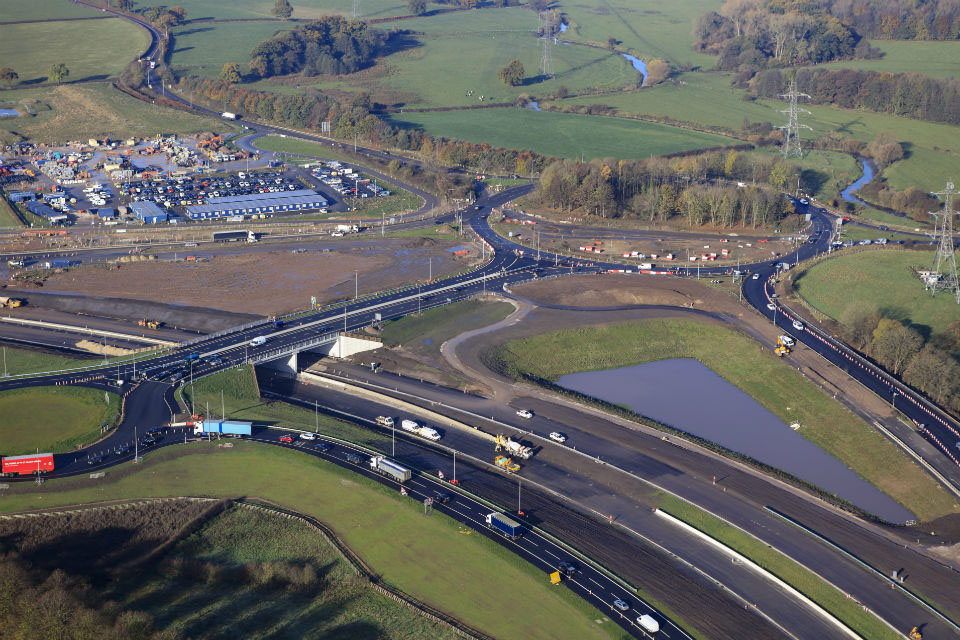 The team working on the Highways England A556 Knutsford to Bowdon improvement scheme is celebrating after reaching a major milestone in the delivery of the new junction 7 free flow link which forms part of the  A556 Knutsford to Bowdon improvement scheme.  Prior to the Christmas break, drivers benefitted from improved, safer journeys as the new free-flow arrangements with the M56 opened for the first time.

This has involved pairing the existing Bowdon roundabout with a new, smaller roundabout which opened in September 2016. The two roundabouts are linked by a new bridge – with the new link roads between the A556 and M56 travelling under this.

Paul Hampson, Highways England project manager, said: “It was a wonderful early Christmas present for drivers to experience the benefits of the new A556 in advance of the main scheme opening. It is testament to the efforts of everybody involved that we safely achieved this milestone and it is a major step forward for the project as we look towards completing the new road.”

During 2016, the scheme has delivered many key construction milestones. Over the summer months, four of the seven bridges associated with the scheme diverted to new alignments and all seven are now complete. A record breaking 3,000 tonnes of concrete based granular material has been laid in a day and over 1,000,000m3 of earth works have been moved.

Rachel Ellison, Costain project manager, said: “To achieve this crucial milestone before Christmas was a fantastic achievement by all involved. It has been the perfect end to an incredible year for the scheme. As we enter the New Year, we are focused on working with Highways England to achieve the next milestone to open the new road to traffic in the spring.”

Last year, the project also raised over £13,500 for a local charity, The Children’s Adventure Farm Trust. Various fundraising activities took place throughout the year including a Wicked Welly Walk along the new road in October 2016.

Construction of the new A556 link road, between the M56 and the M6, started in November 2014 and is expected to be open to traffic in March 2017. Following this, there is a programme of work to de-trunk the existing A556. This involves reducing the carriageway to single lanes and providing non-motorised user facilities for pedestrians, cyclists and horse riders.