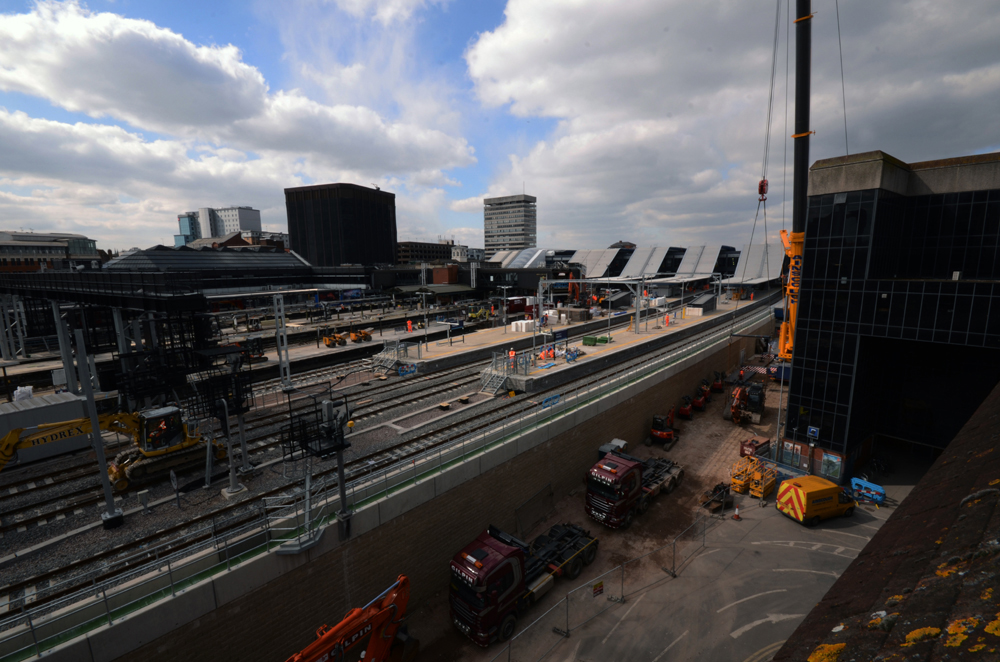 A “monumental piece of work” has brought the completion of Reading rail station’s refurbishment a year closer.

A week of reduced services over the recent holiday week, bookended by a four-day Easter closure and a further weekend stoppage, allowed as many as 2,000 personnel from several organisations – 500 from Costain and its contractors –  to swarm over the station.

Much of the work involved Network Rail (NR) and its contractors commissioning a major new signalling system and track works.

However, the blockade of the rail lines that this entailed enabled Costain’s efforts to be dovetailed into it, said Project Director, Brian Fisher.

The station is undergoing a £100 million renewal, part of a £895 million project to improve the rail network in the Reading area.

Costain’s main tasks were to demolish an old bridge over the tracks, open five new platforms on the north side of the station and refurbish a further two.

Refurbishment took the form of construction of platform buildings, plus new platform surfacing and canopies. “It looks completely different,” said Brian. “It’s gone from being a dated station to a very high-tech one.”

The old bridge has been replaced by a much higher capacity ‘transfer deck’ that links into large new concourses on the north and south sides of the station and has a total of nineteen new escalators down to individual platforms.

NR’s planning meant that the Easter work effectively cut a year off the project’s initially-envisaged completion date; it has also done away with the need for 20 weekend closures.

“It was a monumental piece of work,” said Brian “and we’ve had an awful lot of congratulations.

“David Higgins, NR’s Chief Executive, wrote: ‘Congratulations on the enormous amount of effort over the last week-and-a-half and on the successful opening this morning. Please pass on my great thanks to the rest of your team.’

“And Robbie Burns, NR’s Wales &amp; West Director, added: ‘I’m immensely proud to be associated with the Reading project and, more importantly, with the team that delivered it. It’s a wonderful result but nothing less than you deserve.’”