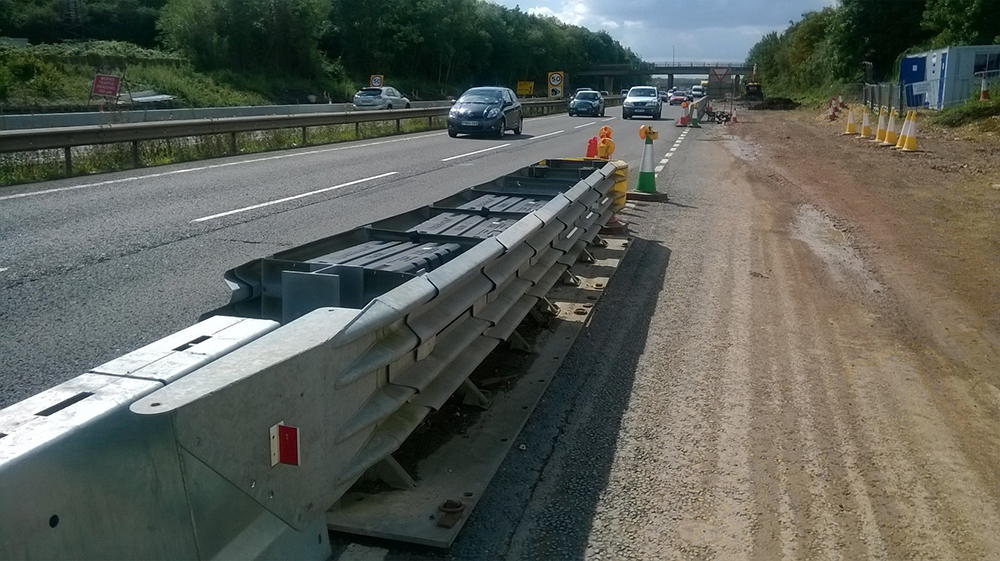 New safety measures put in place on a Costain road-widening project to protect both the site workforce and errant drivers featured on TV screens and in the press recently.

Special collapsible barriers, installed at Girton, near Cambridge, as part of the A14 Junction 31-32 improvement scheme, achieved valuable minutes of publicity on BBC Look East, ITV East Anglia News and Heart Radio, as well as in the regional press.

The ‘crash cushion terminals’ have been erected to help minimise the effects of drivers who fail to heed road warnings and try to enter the worksite or veer off course.

The new terminals are placed at the end of temporary steel barriers at access and egress points to the worksite and consist of steel beams enclosing a series of metal partitions and plastic boxes. If a driver realises he is about to mistakenly enter the worksite and tries to swerve back on to the main carriageway but hits the barrier end-on, the internal structure progressively collapses, helping minimise the impact.

Importantly, this design of barrier is designed to keep the car on the ground. Hitting a conventional steel tapered terminal end-on can flip a car into the air, either on to the carriageway or into the worksite – with obvious risks to other road users in the first case and site workers in the second.

The crash cushion terminals are already in use on some schemes in the UK, but the Highways Agency’s A14 project is the first time that they have been used as part of temporary barriers in the east of England, added Tom.

Despite years of publicity aimed at getting drivers to pay attention to roadway worksites, incidents still happen, he said. “We had a couple of near misses at the beginning of the project, but after the first four weeks of the new set-up we haven’t had any issues.”

Some drivers simply ‘switch off’ mentally behind the wheel, he said. Cars can follow site vehicles entering the roadworks, despite the fact that they have flashing orange lights, fluorescent chevron markings on the tailgate and are clearly marked as motorway vehicles.

The scale of the problem was pointed out by the Highways Agency, which organised the press event. Between 2009-13, eight road workers have been killed and 317 injured while working on or near motorways and major A-roads in England.

Costain is adding an extra lane to the A14 dual carriageway between junctions 31 and 32 in a scheme designed to increase road user capacity along the route.