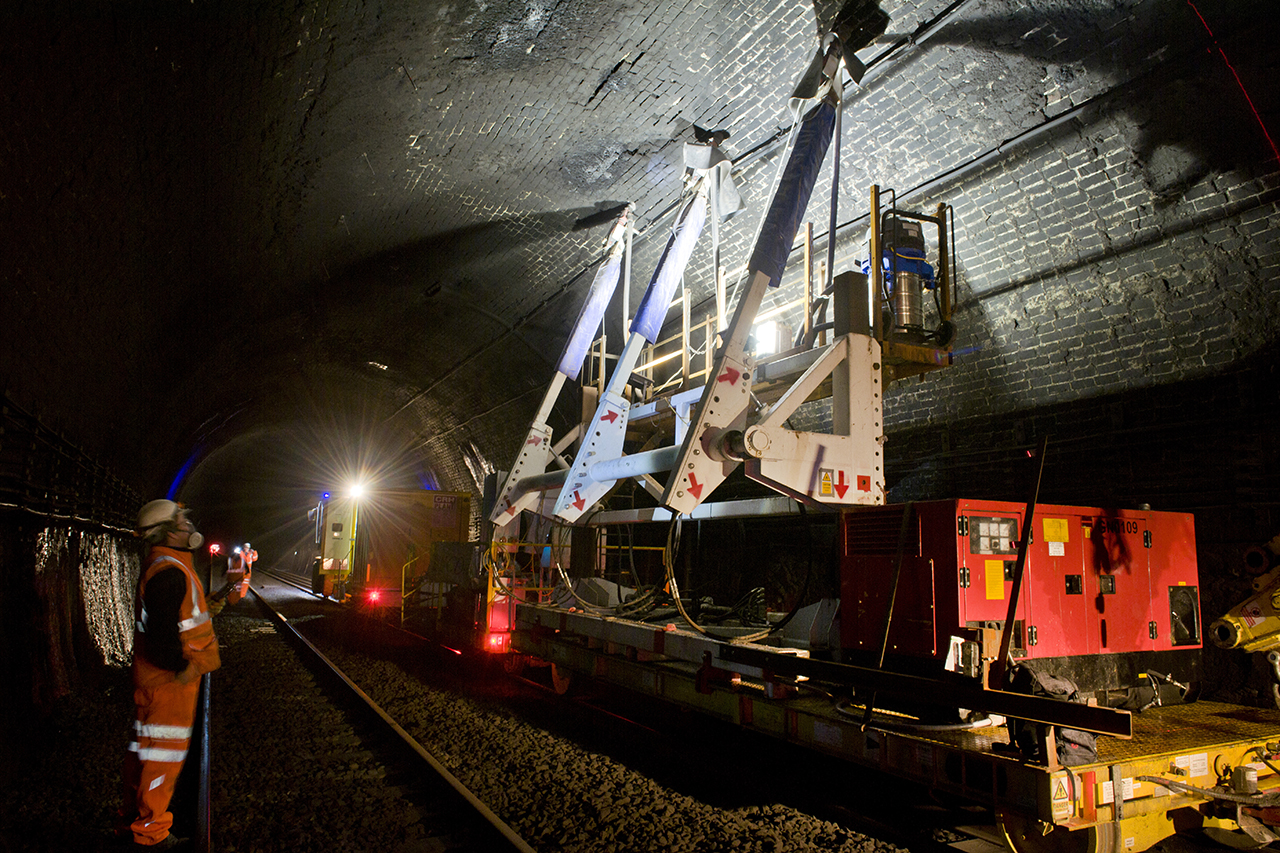 An innovative system for the electrification of the railway track through the Severn Tunnel is being installed by the ABC Electrification joint venture that includes Costain.

Instead of traditional overhead wires, the system going into the 7km-long, 130-year-old tunnel (and several others on the Great Western route between London Paddington and Cardiff) will consist of an aluminium rail, held to the tunnel roof by drop tubes & registration arms, with the contact wire that carries the power supply fed into a slot in the base of the rail.

The system is used widely in Europe but not previously in the UK on ballasted track up to speeds of 125mph. Made by Swiss company Furrer+Frey, the Rigid Overhead Conductor Rail System (ROCS) has several advantages over the usual overhead wire system, said Costain Project Manager, John Skentelbery.

“It’s a more robust system than overhead wires, with reduced maintenance,” he said. It also gives improved contact with the pantograph – the device on the locomotive’s roof that conducts the power supply down to the locomotive’s motor.

Additionally, ROCS is much more compact than the traditional wired system: “It can be used in tunnels where headroom is constrained. Wired solutions need quite a bit of headroom; with the conductor rail system we can minimise the amount of work needed on the track to give us the necessary clearance.”

In some tunnels the track level has to be lowered to install electrification equipment: “Remember that these are Victorian tunnels that were never designed for electrification. We’re trying to minimise the amount of intervention needed on the track.”

Some particular problems facing the ABC Electrification team, which also includes Alstom and Babcock, are the environmental factors in the Severn Tunnel including saline water from the Severn Estuary above it and soot deposition from the freight trains carrying coal that pass through it. For that reason, the metalwork holding the ROCS to the tunnel structure will be made of very high grade stainless steel with a lifespan of around 60 years.

It is also the first time – apart from on a test track – that ROCS has been used above ballasted track. Previously, it was used in conjunction with slab track, where the tracks are concreted into the base of a tunnel.

The whole system is being put through a product acceptance process with Network Rail.