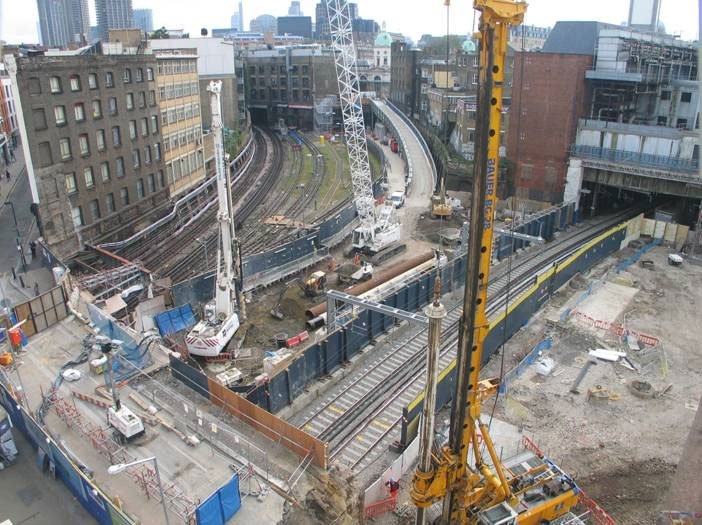 Costain is approaching a critical Christmas milestone in helping to upgrade one of London's major railway interchanges.

A Costain/Laing O'Rourke joint venture (JV) is working with Network Rail on a £172 million major remodelling of Farringdon station, the original terminal of the world's first underground railway, the Metropolitan Line.

Both London Underground trains and national rail services pass through the station, originally built in the 1860s.

The Government funded Thameslink programme, will mean longer and more frequent trains between Bedford and Brighton and through the centre of London. The first 12-carriage trains will begin operating in December 2011 and will bring with them a substantial capacity increase on the current eight-car configuration.

The Thameslink programme requires longer platforms at a number of stations as well as other significant improvements to Farringdon, Blackfriars and London Bridge.

Major improvements at Farringdon include the construction of a new train shed roof, remodelling and updating the existing station entrance, lifts that will provide step-free access to all platforms, creating a new entrance and concourse (Turnmill Street) and building a new 'Integrated Ticket Hall' (ITH) opposite the existing station entrance. The ITH is so-called because it will provide access not just to Thameslink services but also, future east-west Crossrail services.

Cardinal House, a 12-storey 1960s office block which stood on the site, has already been demolished and, where it stood, huge double sleeved piles are being bored 40 metres down to create foundations for the ITH. The JV, under Project Director, Keith Morgan, is in full preparation for the major milestone of erecting steel work for the ITH.&nbsp; "Although working at Christmas is a challenge, the fact that there are no train services for several days means that we can deliver the works more safely and more efficiently than during the time provided by a normal, overnight rail possession."

Both Tube and overground services at Farringdon will cease between Christmas Eve and January 4, with a brief hiatus at New Year when the Tube takes thousands of revellers home from city-centre celebrations in the small hours.

"The site is extremely busy and due to its confined nature every corner has an ongoing critical activity" says Construction Director, Daniel Powrie, who recently re-located from the Church Village Bypass project in South Wales. "Because so much work can only take place when train services are not operating, the site is always just as busy at night and weekends as in the day.&nbsp; This provides a whole raft of different challenges than those found on a highway in South Wales - but the team here is extremely knowledgeable, enthusiastic and they are all going the extra mile to ensure the Christmas milestones are achieved"

"Over Christmas we'll be erecting steelwork for the train shed roof extension and the ITH," says Powrie. "We'll have 40 metre steel beams coming in and it's fundamental that this work gets done."

Even getting material from road level down to the worksite has involved constructing a 90 metre, £500,000 concrete vehicle ramp and a mechanical turntable because there is not the space for vehicles to turn around.

As well as being extremely technically challenging, the Farringdon project also involves greater-than-normal logistical challenges. These include securing the consent for alterations to a Grade II listed building, as well as the significant approval process required when working adjacent to two live railway lines.

At the heart of all of the joint venture's work at Farringdon is the safety of the workforce and an extensive campaign is underway to improve workers safety.

For a business district, Farringdon has a surprisingly large number of residents living in the area. Trying to minimise the project's effect on them falls to Community Relations and Security Manager, Gwyn Williams.

"We've been here two years and we've only had about 100 complaints, most of which have been minor" says Williams. "We don't want to cause any, but bearing in mind the number of neighbours, I don't think that's too bad."

The project writes a monthly newsletter to residents, that gives details of approaching work - and whether the work is likely to generate significant noise or inconvenience. A quarterly community forum, chaired by a local councillor, also gives householders an opportunity to voice concerns and ask questions.

"We mitigate noise as much as possible," says Williams. "For example, we always get the operatives to work behind noise screens when sawing, or to do it down in the basement of the station."

The site sits at the boundary of three local authorities - Islington, Camden and the City of London. "Most of the work is in Islington and the relationship we have with them is excellent. An environmental health officer comes down every two months and we show him round and discuss the work being undertaken in the future; noise mitigation and good communication with all stakeholders are critical in ensuring this job is made as simple as possible"