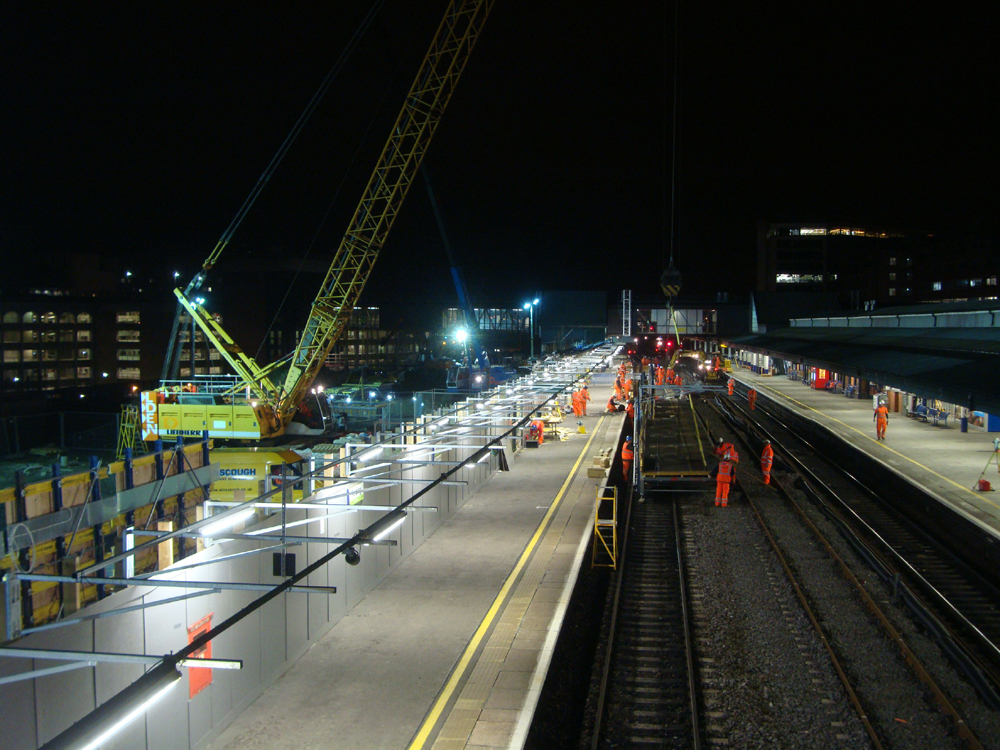 Rail travellers returning to Reading Station after the festive break discovered some of the first major tangible developments in an £80million refurbishment of the site being carried out by a Costain/Hochtief joint venture (CHJV).

The CHJV handed over a new Platform 4 to client Network Rail on 27 December, while a new temporary Platform 10 had taken shape in the middle of the existing running lines with tracks diverted around it. Platforms had also been renumbered.

Reading is one of the UK’s busiest stations outside London, handling around 17 million passengers annually. Not only is it on the Great Western Main Line for express services to South Wales and the West Country, it is the terminus for a network of local routes throughout Berkshire and Oxfordshire.

Additionally, new buildings will be constructed at the north and south entrances of the station, a new roof will be built across the site and virtually its entire infrastructure will be renewed.

The overall effect will be hugely to improve the flow both of trains and passengers within the station.

The Costain/Hochtief team moved on-site in August last year and work had been proceeding 24 hours a day, seven days a week, since then, said Project Director, Brian Fisher.

“An enormous amount of work takes place at night,” he said. “There are no residential properties in the immediate area, although there are hotels and office blocks all around. Noise is not the biggest problem in the world but blocking roads [around the station] is a major issue.”

The completion of Platform 4 on the southeast side of the station was the first of the five new platforms to be handed over. It will be used for local services.

“Platforms are relatively straightforward structures,” said Brian. “The concrete bits are easy – the difficulty comes in building them in the middle of a live railway, which is extremely complex.”

The new temporary platform 10, which will remain in situ for the next  18 months while the project is underway, was largely prefabricated off-site and lifted into position in sections from 24-27 December during a blockade, or closure, of the lines.

“It was a fairly major chunk of work,” said Brian.

Costain already has extensive experience in successfully remodelling major stations – notably St Pancras in central London – and has teamed up with Hochtief to offer a team with strong experience of this type of work for Network Rail. And, although not in the jv but being treated as a jv partner, Bailey Rail will be delivering the mechanical and electrical works on the contract.

Costain’s Director of Rail, Gren Edwards, commented: “The multidisciplinary capabilities offered by our team at Reading have the necessary breadth and depth to deliver this demanding programme of works and we are delighted to be working closely with client Network Rail and the rest of the Reading Station supply chain.”

The station renewal is just part of a huge £850million exercise to completely revamp the rail system in the Reading area that will include renewal of track, signalling and bridges.

Network Rail aims to ‘decongest’ the area by adding track capacity that will not only eliminate the current problem of trains having to wait outside Reading Station for a platform to become available, but allow for six extra freight trains a day to use lines in the area, taking up to 200 trucks off local roads.

Other major facets will include construction of a new viaduct west of Reading to carry fast mainline services over freight and relief lines.

And although the larger project outside the immediate station area will take around six years to complete, passengers at Reading will feel the benefits of the station renewal as soon as it is finished, said Gren.