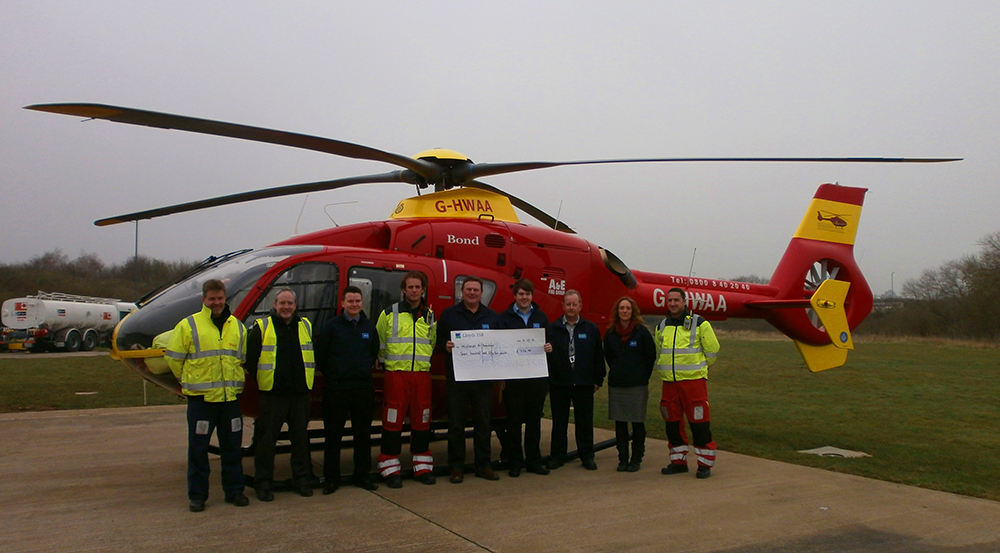 The team from the international engineering and construction group, Costain, working at Severn Trent Water’s Minworth sewage treatment works, has worked together with its contract partners to raise £754 for the Midlands Air Ambulance Charity.

The money will help fund lifesaving missions across the midlands and has been raised with support of Costain’s head office. Through the Green Card Safety Incentive Scheme, whereby site workers remained safe on site and score well in safety health and environmental inspections, employees from Costain and its sub-contractors gained points, which were turned into cash rewards and donated to the charity.

Andrew Mellor, Senior Site Agent, for Costain, comments: “The health and safety of our employees and site visitors is of paramount importance to Costain, which is why we developed our Green Card Safety Incentive Scheme. We are delighted to have raised the money for Midlands Air Ambulance, as the aircrews provide such an important service across the region."

Manjit Chadha, Programme Manager for Severn Trent Water, explains: “We’ve worked closely with Costain for a number of years and safety is a key priority for us. The Green Card Safety Incentive Scheme is great because it promotes safe working and benefits a deserving charity, simultaneously. We’re pleased that the Midlands Air Ambulance was chosen by an overwhelming majority of our team, demonstrating the great support the cause has in our area.”

Adam Williams, regional fundraising manager for Midlands Air Ambulance Charity, adds: “The donation from Costain and Severn Trent Water has been gratefully received. On average we airlift someone who has had a tragic accident on a construction site every single week, so to have the two organisation’s support is vital, and I’d like to thank everyone involved for their commitment and fundraising efforts.”

If you would like to find out more about the Midlands Air Ambulance Charity, please visit www.midlandsairambulance.com or call on 0800 8 40 20 40.