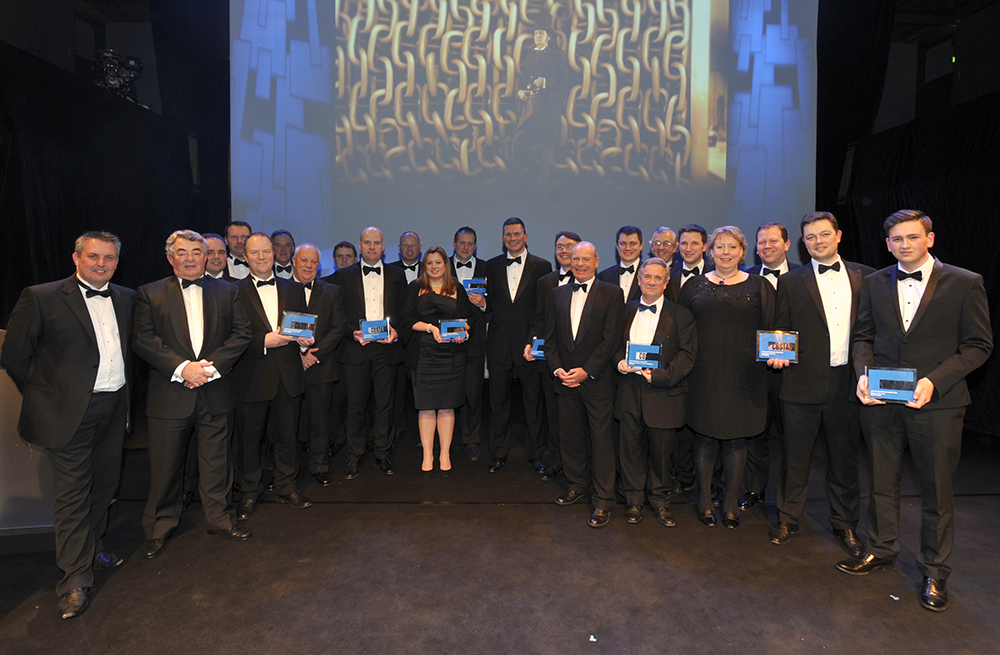 Costain held its annual Achieving Excellence Awards last night, celebrating the outstanding achievements and performances of its people from across the Group during 2013.

Held at Norden Farm Centre for the Arts in Maidenhead, attendees heard how, through hard work and dedication, Costain’s employees have helped to augment the Company’s position as one of the most innovative Tier one engineering solutions providers in the sector.

This year, the Company also awarded three special Costain Cares awards which were given to people who exhibited outstanding initiative, diligence and commitment to the health and wellbeing of those around them. The winners in this category were Carl Mason, Steve Lowe and David Jones, who were also nominated in the Unsung Hero category.

Carl, a General Foreman on the Costain Skanska JV’s Crossrail worksite at Bond Street in central London, saved the life of an elderly man after collapsing outside the worksite. Carl administered first aid for around 10 minutes by clearing the man’s airway with a radio aerial while following instructions from paramedics by phone until the ambulance arrived.

Meanwhile Steve Lowe, a Site Supervisor, and David Jones, an Assistant Estate Engineer, working on an Oil and Pipelines Agency (OPA) contract at Plumley in Cheshire, noticed a contractor’s vehicle suddenly slow down and pull over for no obvious reason. Wondering if the driver was alright, they went to check on him and found the driver having a seizure.  By calling an ambulance and reacting as quickly as they did, the man’s employer, Greystar, acknowledged that Steve and David probably saved his life.

Thanks to their quick thinking, Carl, Steve and David played a fundamental role in preventing a potential fatality. All of these examples demonstrate the safety engagement culture that Costain expects from its people.

Costain's Chief Executive, Andrew Wyllie, said: “The Costain Group has entered one of the most exciting periods in a history spanning 150 years. This Company is now part of a highly select group of suppliers which can deliver a full range of services across the life cycle of a project, ahead of time and on budget.

“This means we have established Costain’s place in the new premier league of our industry. Costain has the wide variety of skills, the innovation and the drive to play a leading role in meeting national needs as customers continue to make multi-billion pound investments improving our nation’s resources.

"This new found status has been earned by our people. They have produced continual excellence and outstanding achievements. Recognising these performances is essential and that is why I am delighted that we are staging these Achieving Excellence Awards 2013.

"In total, we received 1,125 nominations covering every facet of Costain’s business. Our people are driving the Company’s Engineering Tomorrow strategy. They strive for perfection and they achieve success on a daily basis. Let us now fully capitalise on this opportunity to applaud their efforts.”

The winners and the shortlisted nominees for each award are listed below.

Trainee of the Year
Shortlisted Nominees

Winner:
Mammoet (UK) Ltd
• Key role in the delivery and installation of 11 modules at Evap D at Sellafield
• Superb technical achievement
• Each giant module constructed off-site and transported by sea
• A landmark operation for the UK’s largest nuclear project

Winner:
Rail Team
• Has played a major part in the growth of Costain
• Responsible for implementation of new areas of business
• Outstanding project delivery

Innovation of the Year
Shortlisted Nominees

Manager of the Year
Shortlisted Nominees

Contribution to the Community
Shortlisted Nominees

Team of the Year
Shortlisted Nominees

Winner:
Brighton &amp; Hove Team
• New major sewage treatment works delivered by 4Delivery, a Costain joint venture
• The project was concealed from local view, is odour free, features the largest green roof of its kind in the UK, and treats 95M litres of waste water each day through 9km of tunnels, a 2.5km outfall and three pumping stations
• A major achievement which was recognised when the project won the British Construction Industry Award’s Major Civil Engineering Project of the Year 2013 beating strong competition including the London 2012 Olympic Park Project.