Topping Out Ceremony At Lewisham School 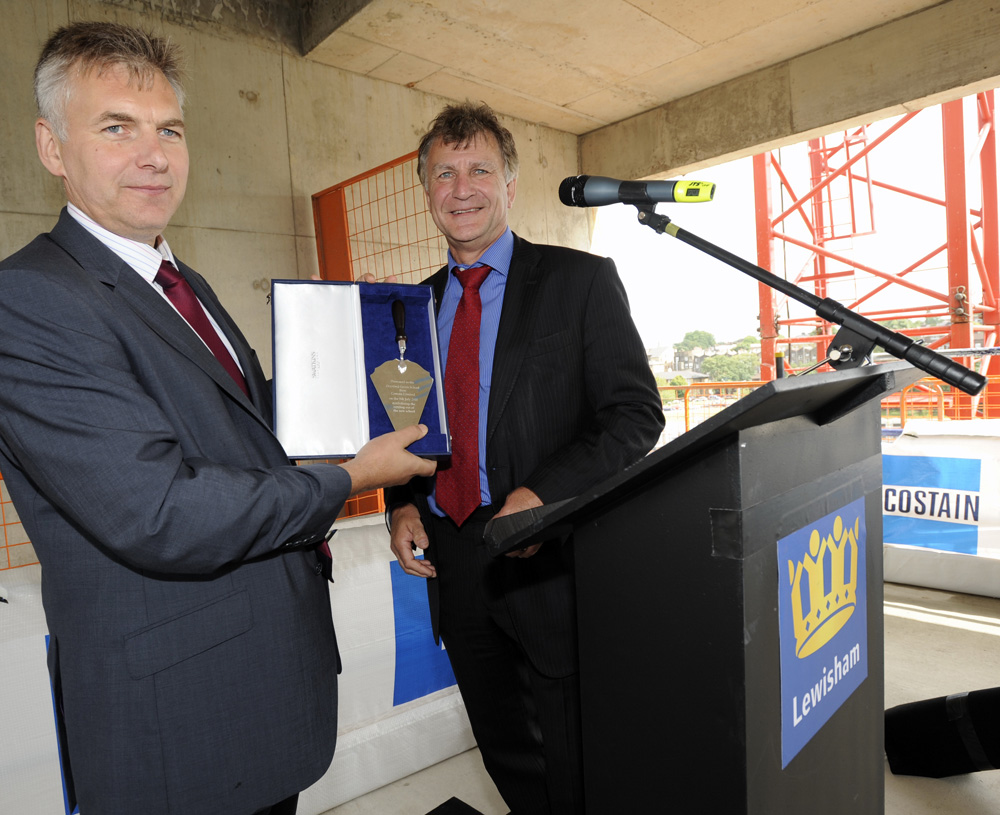 Costain has reached the latest milestone in its programme of reinvigorating educational provision in the London Borough of Lewisham (LBL) with the topping-out of Deptford Green School.

Lewisham’s Mayor, Sir Steve Bullock, did the honours on the 4th floor of the building, which will house around 1,300 pupils when it opens on 3 September 2012. Among those attending the ceremony were LBL’s Director for Young Children Frankie Sulke , Costain’s Managing Director, Environment, Alan Kay and Project Director of the Lewisham Building Schools for the Future programme, Brian Fisher.

Construction on the £28million building began in August 2010 and reached the topping-out milestone in July 2011.

The development consists of a reinforced concrete-frame plus mixed use of external fabrics, including traditional brick and block, curtain walling, timber cladding and coloured Trespa laminate panels. Internally, it contains some exciting features , such as a conference centre at the heart of the building.

The site is on two levels. “We initially constructed temporary accommodation on the upper site and decanted children from the lower site into their temporary home, allowing the team to demolish the lower-site building to make way for the new development,” said Senior Project Manager, Ray Blythe.

“Once completed, there will be a much-anticipated decant into the new, technically advanced building, allowing the upper school to be demolished and the land partly given over to public open space and partly to residential accommodation.”

Deptford Green is a Private Finance Initiative project, with a Design and Build element, said Blythe. It has the distinction of being the first school rebuilding scheme to reach financial close since cuts in the national school rebuilding programme.

A major development in the project’s community relations policy has been the holding of monthly coffee mornings for neighbours, who can drop in to see progress and talk with project staff: “We’re taking them on the same journey,” commented Blythe.