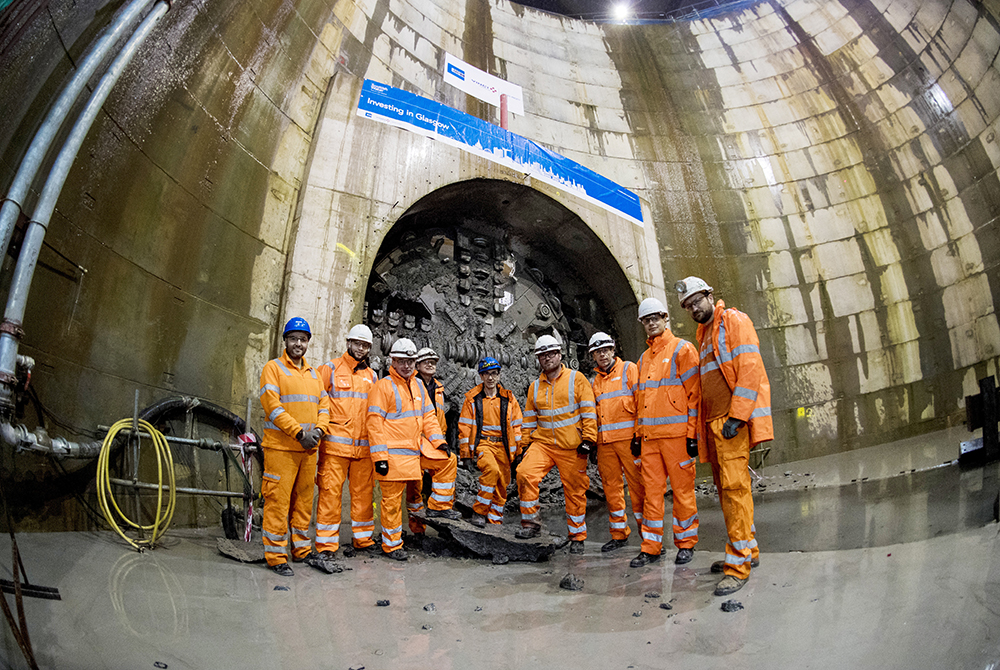 The construction phase of Scotland’s biggest waste water tunnel, which will help tackle flooding and improve river water quality in the Glasgow area, has been completed.

A giant state-of-the-art tunnel boring machine (TBM) has spent 15 months creating the 3.1 mile-long tunnel or sewer beneath the south of the city and last night “broke through” in Queen’s Park.

The construction of the tunnel, which runs from Craigton to Queen’s Park via Bellahouston and Pollok parks, is a major milestone for one of the most important pieces of waste water management infrastructure installed in Glasgow since Victorian times.

With this key phase of the £100m project now complete, further construction and ancillary work will be carried out including work to connect the tunnel to the existing waste water network before the tunnel becomes operational next summer.

The 1000-tonne TBM, which is longer than 14 buses and was named Daisy the Driller by a Glasgow schoolboy, began its mammoth task beneath Glasgow’s south-side in July 2016.

As life above ground in the Queen’s Park area continued as normal in the darkness and rain late last night, the TBM completed the installation of the last of more than 3200 concrete rings that form the tunnel before its giant cutting head emerged at the bottom of a 16 metre-deep shaft to cheers and applause from some of the workers involved.

Welcoming the landmark moment in the project, Douglas Millican, Scottish Water’s Chief Executive, said:  “We are delighted to have completed the construction phase of the Shieldhall Tunnel, which is the flagship project in Scottish Water’s investment in the waste water infrastructure in the Greater Glasgow area – the biggest in well over a century.

“The tunnel will improve water quality in the River Clyde and reduce the risk of flooding in a number of communities. As the Greater Glasgow area continues to develop, we are modernising our waste water infrastructure to support the needs of both existing and future customers.

“The completion of the Shieldhall Tunnel, which will increase capacity and alleviate pressure on the existing network by providing additional storm water storage, is a key part of that network modernisation.

“With Daisy the Driller having reached her destination, we have completed the most challenging part of the project. We now move to linking the tunnel to the existing Glasgow waste water network and bringing the whole new system into operation next year.”

Roseanna Cunningham, the Environment Secretary who launched the TBM in July 2016, said: “The Shieldhall Tunnel is an extraordinary feat of modern engineering which builds on the endeavours of those pioneers who sought to improve Glasgow’s waste water network more than a century ago. Providing an excellent effective waste water network which serves our growing communities is vital to the city’s infrastructure and environment, now and for future generations.

“It represents the latest chapter in our collective aim to provide safe and sustainable ways of managing waste in our biggest city. It is a significant part of the overall investment in Greater Glasgow which is essential to economic prosperity regionally and nationally.

“Improving our drainage and sewerage infrastructure below ground will help deal with the impact of climate change while also helping the city to grow, develop and flourish.”

Mark Dickson, Director of Capital Investment for Scottish Water, said: “Communities across Greater Glasgow will benefit in many ways from the full commissioning of the tunnel in 2018. We recognise that a project like this can be disruptive and we have worked hard to minimise that wherever possible. Scottish Water is investing £3.5 billion throughout the country to deliver infrastructure which is fit for communities now and for decades to come.”

Dominic Flanagan, Scottish Water Project Manager, said: “Many hundreds of people have worked as part of Costain VINCI Construction Grands Projets Joint Venture (CVJV), which was set up to deliver the tunnel, to get us to this point. Building the tunnel has required a wide range of specialist skills, knowledge and expertise and our workforce has included local contractors and those with international experience and backgrounds. We are all enormously proud of what we have achieved for the good of the people of Greater Glasgow.”

“This is one of the most challenging projects many of us have worked on and the completion of the tunnel construction is testament to the skills, knowledge and determination of our team who have safely delivered a high quality piece of infrastructure that will have a huge positive impact for the city now and in the future.”