Celebrations as first giant London tunnelling machines are switched on 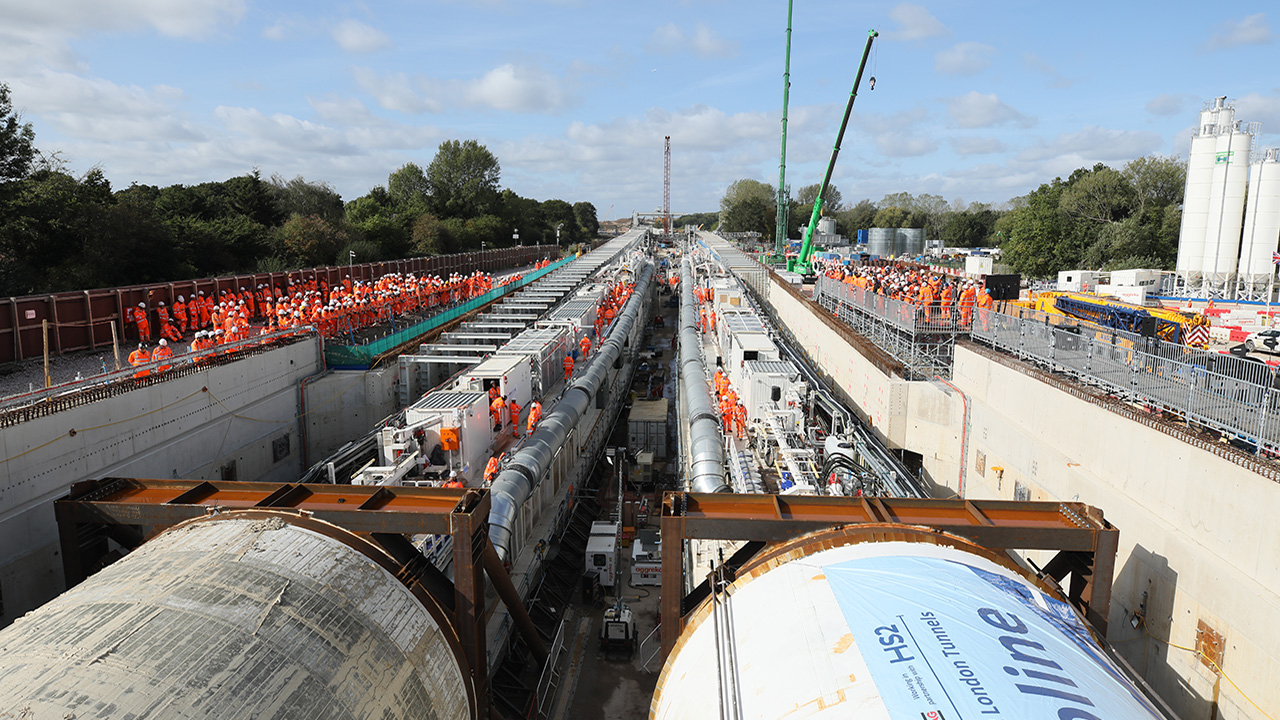 HS2 and partners celebrated the start of the next phase of tunnelling on the enormous infrastructure project, launching the first of six tunnel boring machines that will dig over 26 miles of tunnels under the capital.

HS2 Ltd.'s CEO, Mark Thurston was joined by local teacher, Sushila Hirani, after whom one of the tunnel boring machines at the West London site is named, as it begins on its five-mile journey.

“Sushila” is the fourth of 10 HS2 tunnel boring machines to be launched. The milestone highlights the progress being made on building Britain’s new high speed rail network, creating jobs, and providing contracts for businesses now.

Later this year a second TBM, named after 18th century astronomer Caroline Herschel, will also be launched from the West London site to build the second of HS2’s twin-bore tunnels towards central London.

Speaking about the launch, the HS2 Minister, Kevin Foster MP, said: "This launch is a landmark moment in the delivery of HS2, helping link London to Birmingham and unlock better connections, quicker journeys and create thousands of skilled jobs across the North and Midlands.

“Already well underway, HS2 is set to revolutionise journeys for communities throughout the country, boost local economies and, at its peak, support more than 34,000 jobs across the UK.”

Each weighing over 2,000 tonnes and measuring 140 metres in length, both TBMs will bore five miles non-stop for 22 months, except Christmas Day and bank holidays, to Green Park Way in Greenford, where they will be dismantled and lifted from the ground.

Separately, two other equally massive tunnel boring machines will set off towards Green Park Way from HS2’s Victoria Road site in 2023 to build a further 3.4mile twin-bore tunnel. Together the quartet of TBMs will build 8.4miles of twin bored tunnels between West Ruislip and the new high speed rail super hub station at Old Oak Common.

Another tunnel 4.5-mile twin-bore tunnel extending from Old Oak Common to Euston will complete HS2’s journey to its London terminus.

Each TBM is operated by 15 people, working in shifts. A team of around 40 people assembled the TBMs, with 56 companies involved in getting the site ready and machines launched.

In total the 10 TBMs will create 64 miles of tunnels on HS2 between London and the West Midlands.

HS2 Ltd CEO Mark Thurston: “The launch of the TBMs on the largest section of tunnels through London is a major moment for HS2, and one that demonstrates the brilliant momentum that has built behind Britain’s flagship levelling-up project.

“The construction of 170 miles of new high-speed railway between London and Crewe is now in full swing, supporting 27,000 jobs, 1,000 apprenticeships and contracts for over 2,500 businesses.”

Speaking about having HS2’s first London tunnel boring machine named after her, Sushila Hirani, Head of Department and Lead for STEM at Greenford High School, said: “I was surprised that the Willow class pupils at Dairy Meadow chose to put my name forward for this honour. When I met the pupils, I was impressed by how much work they had already engaged in relating to design and technology and STEM (Science, Technology, Engineering and Maths), led by their teacher Prabhjot Uppal, who is the design technology lead at the school. I have always had a passion for industrial design and engineering, and if this event helps young people connect with engineering and inspire them to pursue this path, then my small contribution here has been worthwhile.”

The second TBM to be launched has been named Caroline after the German-born British astronomer Caroline Herschel. Considered the first professional female astronomer, discovering three new nebulae (hazy clouds where stars form) in 1783, Herschel went on to be first woman to ever discover a comet in 1786. She made significant contributions to the work of her astronomer brother Sir William, executing many of the calculations connected with his studies. She compiled a catalogue of 2500 nebulae and, in 1828, the Royal Astronomical Society awarded her its gold medal for this work. Her name was put forward for the TBM by pupils at Brentside Primary Academy in Ealing, who were inspired by her contribution to astronomy whilst learning about earth and space in their science lessons.