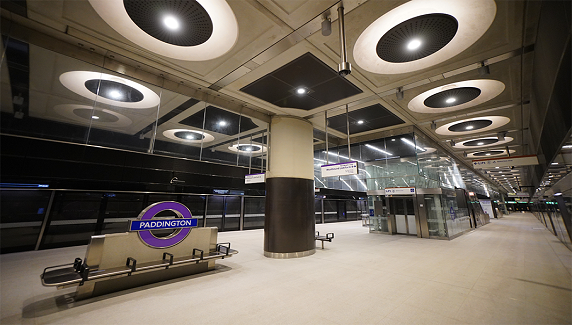 Built by delivery partner Costain, in a joint venture with Skanska, the Paddington Elizabeth line station has been officially transferred to Transport for London (TfL) and is an outstanding example of collaborative working.

This is the sixth of the new Elizabeth line stations to be transferred over to TfL, following Custom House, Farringdon and Tottenham Court Road, Woolwich, and Liverpool Street stations. TfL will be responsible for operating the line and station.

Built below ground adjacent to the 19th Century Grade I listed building, the new Elizabeth line station has a 120-metre-long entrance canopy on Eastbourne Terrace, it extends four levels below Eastbourne Terrace and Departures Road with entrances via a newly pedestrianised public area that connects to the existing national rail station.

Costain’s James Moloney, project director for the Costain Skanska joint venture said: “Achieving this key milestone is testament to the dedication and hard work of everyone who has been involved as part of our Costain Skanska JV team. It’s a complex project that has been delivered during COVID-19 restrictions. Our teams have collaborated well and responded to the challenge, with the handover to TfL down to the efforts of the many people involved in delivering this important new station.”

The Elizabeth line will help transform life and travel in London and the South-East by dramatically improving transport links, providing additional capacity, and transforming accessibility with spacious new stations and walk-through trains.

“The Paddington Elizabeth line station will be a key part of London’s transport infrastructure for generations to come, helping people to travel sustainably into and around this amazing city. We continue to remain focused on working collaboratively to deliver the final elements of the scheme,” added James.

Already a busy terminus for local, regional, and international passengers, the new station further increases capacity at this major interchange and secures Paddington’s role as one of London’s most important integrated transport hubs - combining access to rail, tube and bus services with international air travel and opportunities for active travel - and a key gateway to the city for the Thames Valley, Wales, and the west of England.

In doing so, the Paddington Elizabeth line station creates a compelling alternative for customers to travelling by car – which is particularly important as we recover from the pandemic – and represents a vital contribution to reducing carbon emissions in central London.

The Elizabeth line will provide new journey options for those travelling through central London, with journeys from Paddington to Farringdon taking just 8 minutes.

Mark Wild, Crossrail Chief Executive, said: “I am delighted that Paddington station has been transferred to Transport for London. This beautiful new station will provide greater transport links, better job opportunities and a significant economic boost.

“Over the past months we have entered the trial running phase, starting with four trains per hour and have now reached 12 trains per hour through the central tunnels and six of our central section stations are now safely in the hands of TfL. There is still a tremendous amount of work to be done but the railway remains on track to open next year.”

As delivery partner, the Costain Skanska Joint Venture will continue demobilisation from the site.