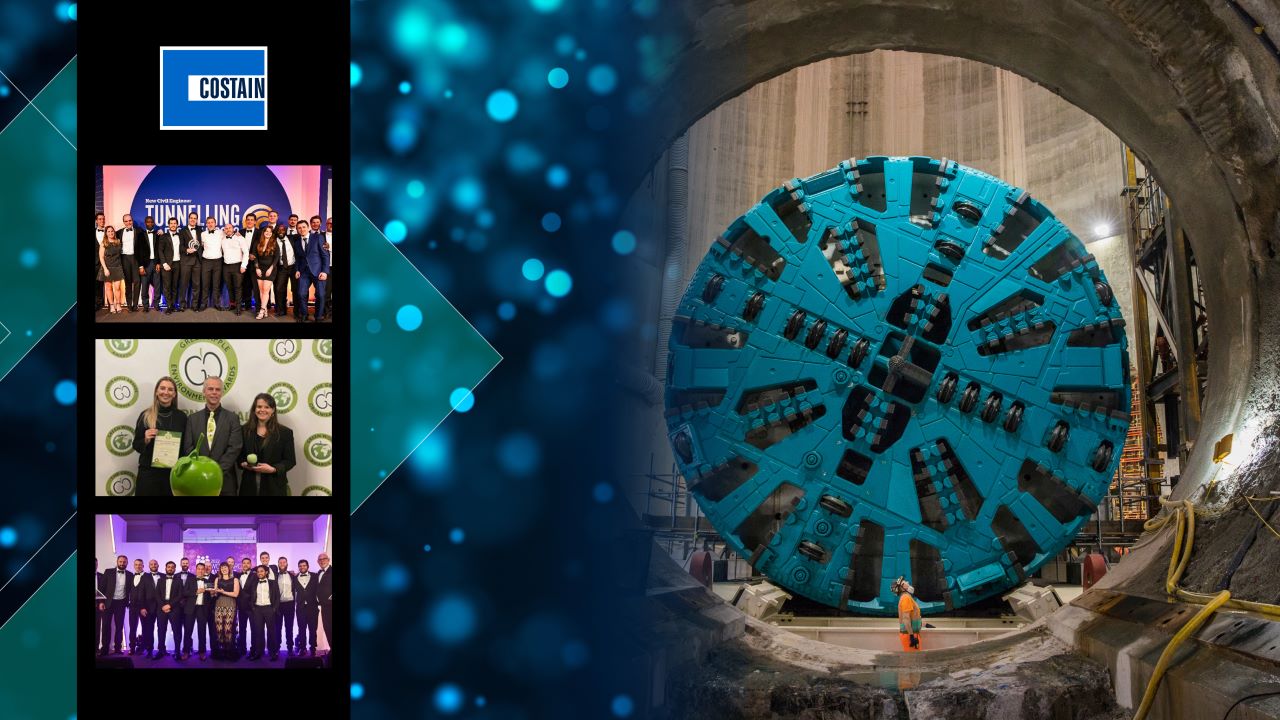 As the winter awards season comes to an end, the Tideway Eastern section team have plenty to celebrate having been awarded three industry accolades.

Tunnelling on London’s Thames Tideway Tunnel started in 2018 and Costain in joint venture with VINCI Construction Grands Projets and Bachy Soletanche, has been working alongside client Tideway, on the Eastern section of tunnel. The new sewer will protect the River Thames from pollution and modernise London’s Victorian sewerage networks for the 21st century.

This month the JV won the prestigious Tunnelling Project of the Year (over £100 million) award at the NCE Tunnelling Awards. The international award recognises the best tunnelling project currently under construction.

The project was selected based on the complexity of the scope of works and the collaborative culture of the team. Achievements to date include:-

- Installation of two tunnel boring machines (TBMs), the heaviest of which was 800Te and the removal of three TBMs

- Initiation of a Hybrid shift pattern, utilising a combination of 8 and 12 hr shifts. This has been so successful it has now been adopted by other tunnelling projects across industry

- Exceeding expectations in relation to the More by River initiative, by transporting all segments for the main tunnel via barge to the Chambers Wharf site and by utilising the river for the majority of the Main tunnel and Greenwich tunnel muckaway.

Judges comments: “This submission provided evidence of high quality design, integrated with procurement to give programme certainty. This continued with good delivery rates, collaboration with the adjacent TT contract to extract their TBM and low-carbon concrete being used for c60% of the permanent works. The differentiator with this submission was the excellent initiative to increase the skills of the workforce by providing on-site training facilities and supporting their progression through the project.”

In the same month, one of the Tideway Eastern section sites, the King Edward Memorial Park Foreshore site team, won Team of the Year award at the Construction News Workforce Awards. This location is one of the most polluting sewer overflows into the river and our work will not only divert the sewage into the new super sewer but also extend the park area above for the local community.

The JV also received the prestigious Green Apple Environment Award that was presented at the International Green Apple Awards in the House of Commons, Palace of Westminster, London. The award was in recognition of key initiatives to reduce carbon footprint related to fuel use. These include an anti-idling campaign, changing from diesel to HVO biofuel and where possible using or trialling electric plant alternatives. Since the anti-idling campaign was launched in April 2022, CVB have reduced idling by 20.6% from 64.1%.

Remarking on the awards, Gerard Shore Water Sector Director commented: “It’s fantastic that the team have received industry recognition for the work involved in this extremely complex engineering project. None of it would be possible without the supply chain partners and wider stakeholders that are working together to improve the lives of millions of Londoners who rely on the River Thames.”