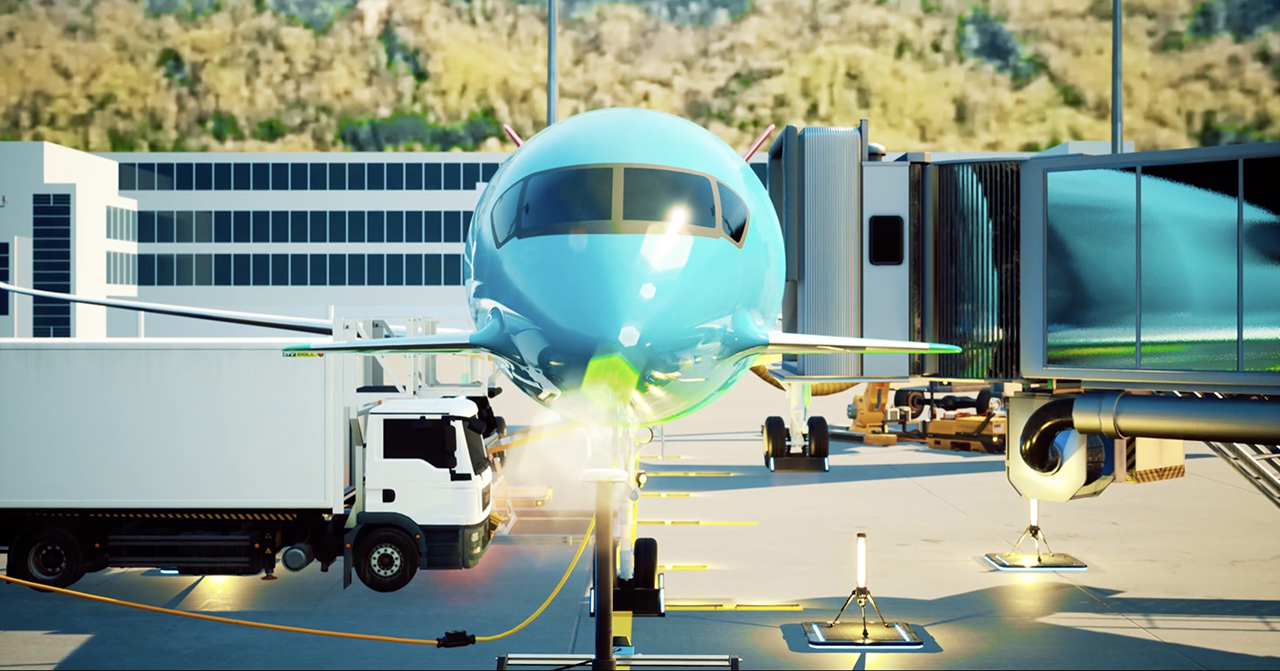 Harnessing the potential of hydrogen to transform the performance of aviation

Our strategic study for the ATI’s FlyZero project explores the feasibility of transitioning aircraft to cleaner energy by the end of the decade, as part of a pioneering research initiative aiming to realise zero-carbon emission commercial flights by 2030.

Multiple organisations were involved in the FlyZero project, which incorporated dozens of different streams of work.

The study found that with suitable development, liquid hydrogen refuelling would result in feasible turnaround times at airports and identified a pathway to achieving the transition from kerosene

Given the higher energy mass of hydrogen, it is likely that aircraft will need to be refuelled less, minimising the number of daily turnarounds

Led by the Aerospace Technology Institute (ATI) and backed by the UK Government’s Department for Business, Energy & Industrial Strategy, the one-of-a-kind FlyZero research project set out to realise zero-carbon emission commercial aviation by 2030. The project brought together experts from across the UK to conduct a detailed and holistic study of the design challenges, manufacturing demands, operational requirements and market opportunity of potential zero-carbon emission aircraft concepts.

Costain’s remit included assessing the practical and regulatory requirements for the safe and efficient ground operations needed to support hydrogen-powered aircraft, as well as the commercial implications of these requirements and future operations. We examined the conditions required for storing hydrogen and the impact of its use on turnaround times of planes at airports. Our team explored the role of technology in streamlining operations by identifying opportunities to automate aspects of the turnaround process. These findings also provide a better understanding of the commercial drivers, which would influence the uptake of hydrogen by airports and airlines, such as the need for timely turnarounds of aircraft in line with competitive flight schedules.

One key area of challenge we examined was safety distances during refuelling. Current fuelling operations using kerosene require a three-metre radius exclusion zone. This is very likely to increase with the introduction of hydrogen, reducing the ability to undertake simultaneous activities, such as unloading bags and disembarkation/embarking of passengers, while refuelling. As part of our study, we explored the role of novel technologies in facilitating the safe and efficient use of hydrogen. This included identifying opportunities to automate and remotely control aspects of the turnaround process, mitigating increases in turnaround time by making simultaneous activities more likely in future. Given the higher energy content of hydrogen on a mass basis compared to kerosene, it is also likely that aircraft will need to be refuelled less frequently.

One such example is the infrastructure required to refuel an aircraft with hydrogen. The use of a robotic arm system would enable automated refuelling, minimising risk by ensuring employees remain at a safe distance from the aircraft and removing the need for heavy lifting.

Watch animation to discover what refuelling could be like in future, using these innovative technologies

The potential transition to hydrogen will also necessitate large-scale changes to infrastructure. However, these could be tackled using techniques that are well understood in the energy sector. To provide strategic advice, we drew upon our industry-leading hydrogen capability from projects exploring the production, storage and distribution of hydrogen, such as the HyNet and HyValue projects, alongside our role leading the South Wales Industrial Cluster and advisory roles within the Hydrogen Advisory Council Working Group and the Decarbonised Gas Alliance.

If commercial flights fuelled by liquid hydrogen are to be achieved by 2035, the recommendations made in our feasibility report will need to be trialled in a real-life environment. As an industry, we require an integrated test facility, so that we can adopt a systems approach to the transition to hydrogen aviation.

Alongside the FlyZero research, we undertook a detailed study into the potential use of hydrogen for the Zero Emission Flight Infrastructure (ZEFI) programme. The research is being led by Connected Places Catapult, the UK’s innovation accelerator for cities, transport, and place leadership, in collaboration with the Department for Transport.

Our report provides a high-level overview of the infrastructure requirements to support the transition to net zero. We developed a range of use cases, including: