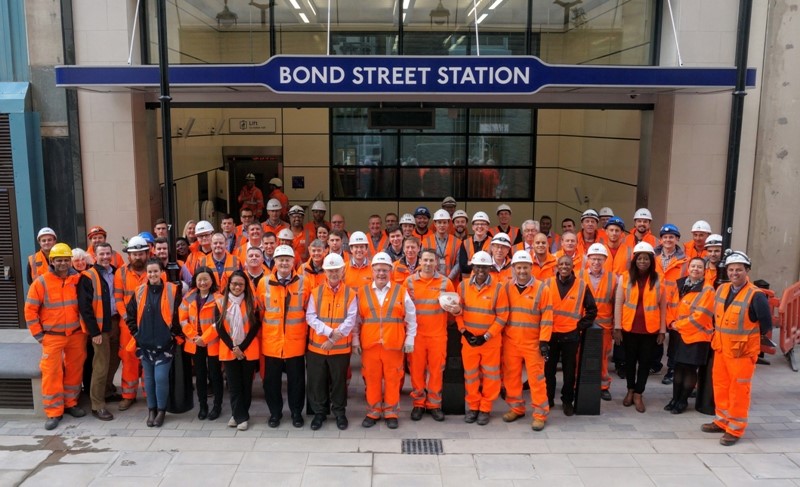 Our team working on the £300m revamp of Bond Street Tube station reached a proud milestone on the morning of the 17 November, just in time for the Christmas shopping surge.

The London Underground station upgrade - a joint venture between Laing O'Rourke and Costain - opened to the public at 5.30am, and as one of the busiest stations in on the network will see its capacity increase by 30 per cent.

Bond Street now has a new entrance on the north side of Oxford Street at Marylebone Lane, providing step-free access for the first time, with both ends of the busy shopping street now served by step-free stations, with Tottenham Court Road having lifts too. Bond Street is the 72nd Tube station to become step-free, with the London mayor aiming to get 40 per cent of the network there by 2022.

The revamped station has a new ticket hall with five new gates, two new escalators and two new interchange tunnels to help ease congestion. Passenger numbers are expected to rise to around 225,000 a day when the Elizabeth Line is up and running - at present, more than 185,000 people use Bond Street station daily.

Having taken seven years to deliver it was described by project manager James Brookfield as "a triumph of engineering and collaborative working, and a lasting tribute to the tireless efforts, dedication and determination of the entire team."

The team's vision for the project was that Bond Street station would be 'the exemplar project on which all future London Underground contracts are modeled', which has kept them focused at every stage of the project’s life-cycle.

Mark Wild, London Underground's managing director, said: "The new, modernised Bond Street station will make journeys quicker and easier for the hundreds of thousands of people who travel through it every day. It’s fantastic to open the station in time for the Christmas shopping period, making Oxford Street more accessible to all of our customers as well as boosting businesses in the area.”

He further added “Great work by ourselves and our fantastic team of contractors….I am proud of the team that has delivered this.”

During the project the team has received commendation for safety through a RoSPA gold medal, the environment through the Green Apple awards, team of the year at the London transport awards, tunneling project of the year at the tunneling and underground space awards and multiple considerate constructors gold awards.