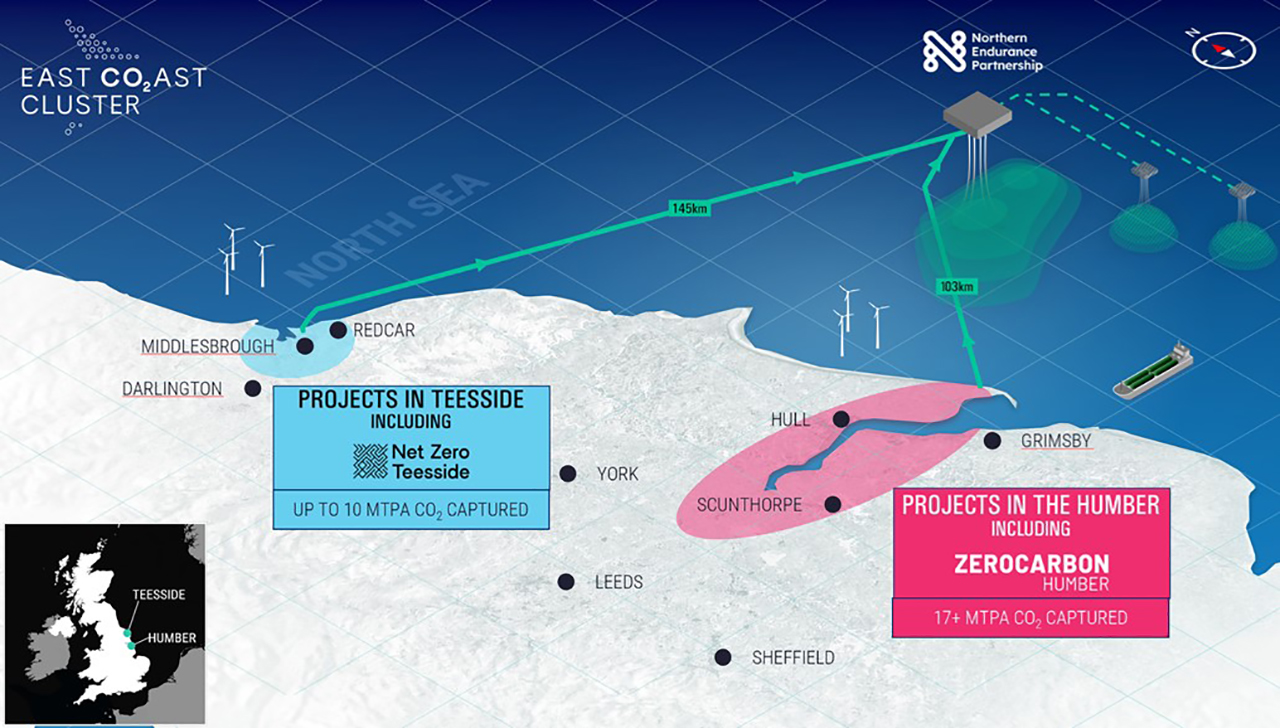 On behalf of its partners, bp – the operator of the Northern Endurance Partnership (NEP) - has awarded Costain the onshore FEED contract for the East Coast Cluster carbon capture, utilisation, and storage (CCUS). Costain will design the onshore CO2 gathering pipeline and the new grid connection for the gas power-station.

The carbon capture and storage (CCS) project will provide the common infrastructure needed to transport CO2 from emitters in the Humber and Teesside to secure offshore storage in the North Sea. This will include H2Teesside, bp’s world-scale hydrogen project that aims to produce 1GW of CCUS-enabled blue hydrogen and start-up in 2027.

The award reinforces Costain as a key player in delivering the UK government’s ten-point plan for a green industrial revolution, which aims to make the UK a global leader in green technologies, create thousands of jobs, and establish the first ‘net zero’ carbon industrial cluster in the UK by 2040. It represents a significant boost for the industrial heartlands of Teesside and the Humber and will play a significant role in improving the lives of people living in the Northeast.

Sam White, Costain’s Managing Director Natural Resources said: “This project will drive transformational change to meet the UK’s sustainability commitments. It places Costain at the heart of Teesside to design and deliver the infrastructure needed to transport CO2 from onshore to offshore, bringing investment to the region and helping create a world-leading industrial cluster on the East coast.”

The award comes after the Department for Business, Energy & Industrial Strategy (BEIS) selected the East Coast Cluster in October 2021 as one of the UK’s first CCUS clusters to move forward in development.

Costain is now an established leader in four of UK industrial clusters, including the South Wales Industrial Cluster, where Costain is leading the deployment project. The company is also working with INOVYN to develop a first-of-a-kind underground hydrogen storage facility for the HyNet project (the scheme at the heart of the Merseyside cluster) and has undertaken a FEED study for Storegga’s Acorn carbon capture and storage project for the Scottish cluster.

The Northern Endurance Partnership - a joint venture comprising bp, Equinor, National Grid Ventures, Shell, and Total Energies – will enable the East Coast Cluster by developing the common infrastructure needed to transport CO2 from emitters across the Humber and Teesside to secure offshore storage in the Endurance aquifer in the Southern North Sea.

Andy Lane, Managing Director of Northern Endurance Partnership, said: “We look forward to working with Costain and Genesis on the detailed engineering design of NEP CO2 transport and storage system which will enable the East Coast Cluster to remove up to 50% of the UK’s industrial cluster CO2 emissions, create jobs and help establish the UK as a leader in the energy transition”.