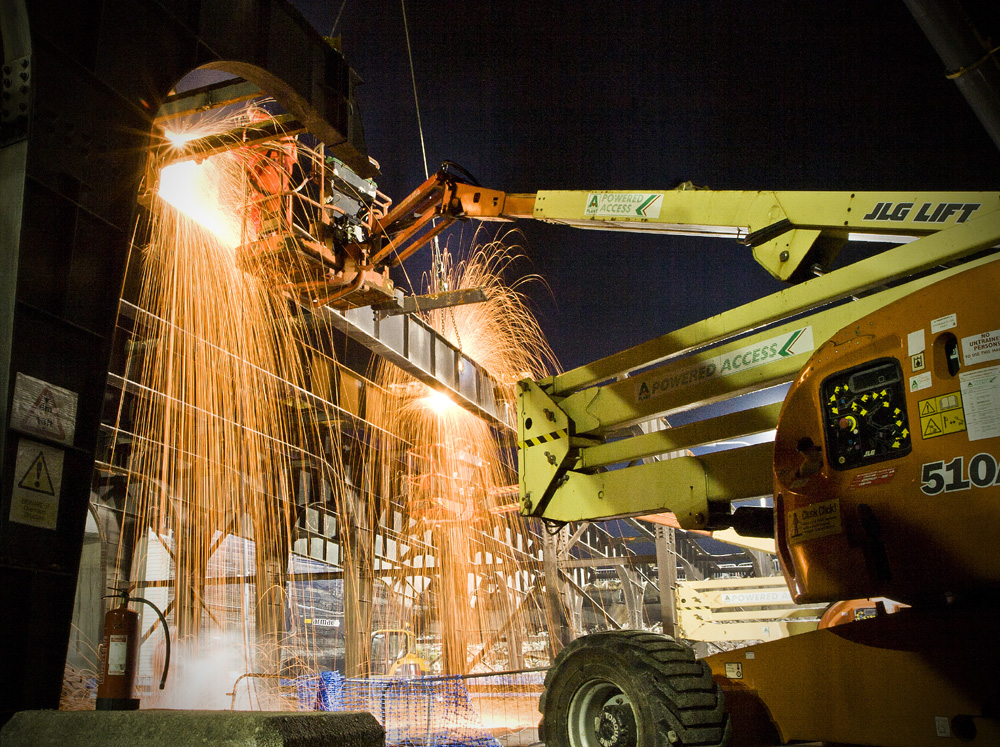 A major milestone in the construction of the Costain project Harbour Way* has taken place with the demolition of Cefn Gwrgan Bridge, in Port Talbot.

The old bridge, which had been the main entrance into the Tata Steelworks for over 60 years, was demolished to make way for a new 150m long road-over-rail bridge that forms an integral part of Harbour Way.

The £107m project is jointly funded by the Welsh Assembly Government and the European Regional Development Fund.

Before demolition could begin, temporary reinforced earth ramps and walls had to be constructed to divert traffic over the partially completed new bridge and then onto a completed section of Harbour Way to Tata’s newly constructed main entrance, ensuring uninterrupted access to the steelworks.

The controlled demolition of the old bridge had to be meticulously planned due to its crossing of the Swansea to Paddington mainline railway and having a number of strategic services which feed the steelworks underslung from its deck.

Initially the parapets were removed using burning equipment and folded back by excavators with selector grabs. Once crash mats were laid out, the cantilevers and the main deck of the bridge were predominately removed using excavators with multi-tool attachments. Where more sensitive techniques were required, deck sections were cut out using wire-saws and then lifted out.

On the final weekend rest cuts were introduced into the remaining steel portals and lifted out sequentially using a pair of mobile cranes. Once the last of the bridge impact blocks were wire-sawed and removed, the track was handed back to Network Rail four hours early, utilising only three out of the four planned disruptive rail possessions.

John Skentelbery, Costain’s Project Manager said: “The successful demolition of Cefn Gwrgan Bridge is a major milestone in the construction of Harbour Way. It means that we remain on target to complete the project on time by the autumn of 2013.”

For more information about Harbour Way and to view the latest progress photos and time lapse videos visit www.harbourwayproject.com.