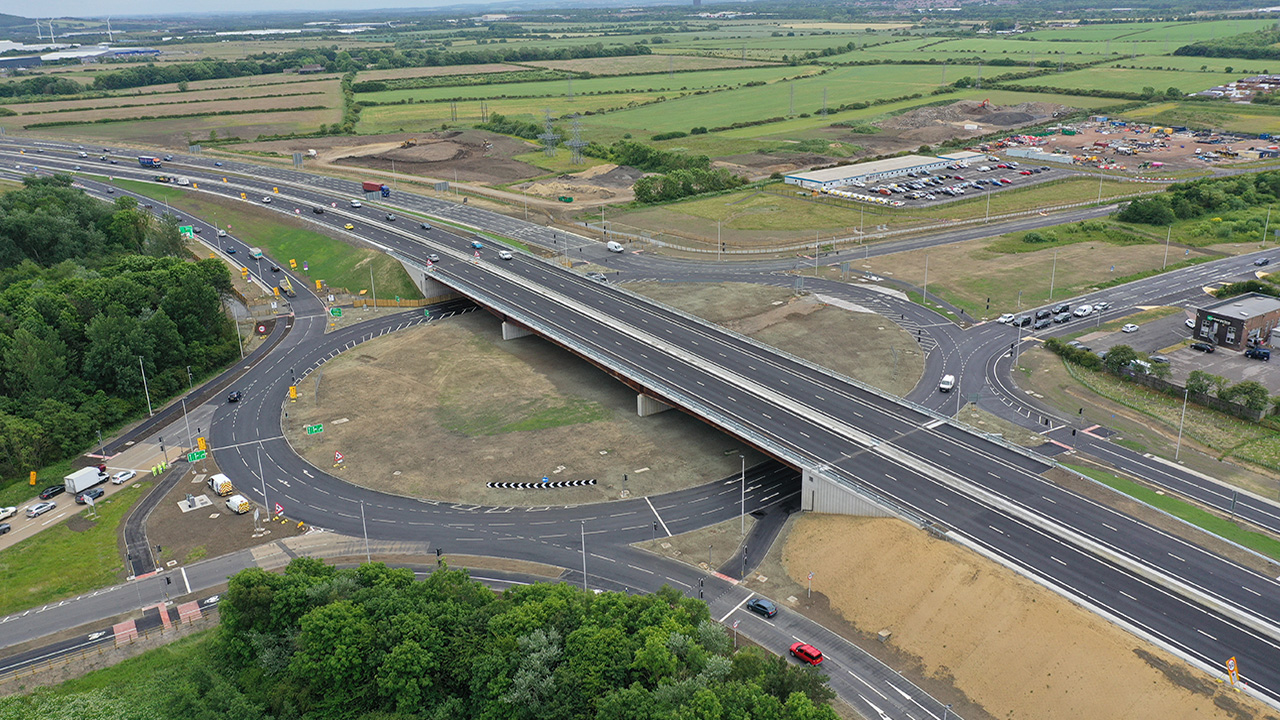 After more than a million hours of work – around 60 per cent of that time coming from a local workforce – the £130m A19 Testo’s Junction improvements are complete.

Delivered a month ahead of schedule and on budget by Costain for Highways England in Sunderland, the two-year scheme supports the UK Government’s ‘Build Back Better’ plan for economic growth, significant investment in infrastructure and the transition to net zero.

The A19 project will provide safer, more reliable, and environmentally conscious free-flowing journeys through a traditionally congested network.

The nearby A19 Downhill Lane scheme provides extra capacity on the junction between the A19 and the A1290 and supports plans for the development of the International Advanced Manufacturing Park (IAMP). New link roads will be created between Downhill Lane and Testo’s, optimising journey times and providing new facilities for pedestrians, cyclists, and horse riders.

Russell Furnival, Costain’s project lead for the A19 had a clear strategy from the outset. Intelligent planning, identifying key milestones early and making them visible and visual for all was a constant. Supported by the empowerment of this project team, who were able to make decisions and take ownership played a huge part in the successful delivery.

The use of digital tools was key, especially during the COVID-19 pandemic and lockdown, explains Russell, “The early adoption and continued use of Aphex, a cloud-based planning tool to track, update and communicate the programme in real time and from anywhere in the UK helped us. It allowed for remote working and maintaining social distancing at a critical time for the project and for the wellbeing and safety of our people.”

Focussing on delivering safely, effectively, and efficiently enabled the early completion. “Robust planning and delivery were essential, with construction phasing agreed at a very early stage and the team stuck to the plan,” he added.

Throughout the pandemic, the Costain A19 team worked with schools and engaged virtually with more than 600 people at Newcastle, Northumbria, and Teesside universities. They supported charities across the region, donating toys to the NSPCC recovery centre in Newcastle and supported pop-up foodbanks in Jarrow and Boldon Colliery.

“The £130m Testo’s junction upgrade will be hugely beneficial to the North East, providing swifter, more reliable free-flowing journeys and supporting economic growth in the region.

“As we build back better from the pandemic, this Government will continue to invest billions of pounds to improve infrastructure, boost connections, and level-up regions right across the country.”

“This opening is an important milestone in the substantial investment being made in the North East’s major A roads.

“These improvements will make a major contribution to the region, from providing better journeys to and from the region’s ports and Teesside airport, to improving journey times for local people who can get home more quickly and safely to their families or to and from their workplace.

“Our roads are not only the lifeblood of our economy, they support local as well as national businesses, and are vital to enable our emergency services to support local communities.”

Find out more about Costain’s A19 story here.