Daisy Gets Drilling In Glasgow 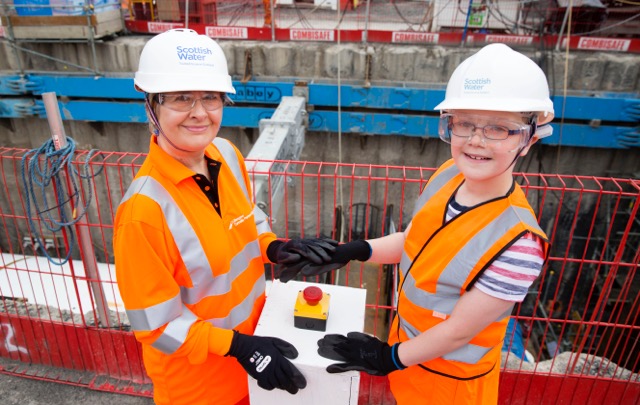 Daisy, who weighs in at 1000 tonnes and is 180 metres long, is now at work under Glasgow, in the £100 million Costain-VINCI Construction Grands Projets Joint Venture (CVJV) project for Scottish Water.

The 3.1-mile long, 4.7 metre diameter tunnel between Craigton and Queen’s Park will enable Scottish Water to improve water quality in the River Clyde and its tributaries and tackle flooding. When complete in early 2018, it will provide 90,000 cubic metres of extra storm water storage. It is a key part of Scottish Water’s £250 million, five-year programme of work, launched in 2013, to improve river water quality and the natural environment.

The TBM was named Daisy the Driller by Lewis Bennett, of Craigton Primary School, following a competition run by Scottish Water. He was present to see Roseanna Cunningham carry out the naming ceremony by dropping a bottle on the side of the machine from above the launch chamber, in the style of ship launches on the Clyde. But instead of the customary champagne, the bottle contained a litre of finest Scottish water.

Said Ms Cunningham: “I am delighted to have launched the tunnelling phase of the Shieldhall Tunnel project, which is the biggest project in Scottish Water’s on-going investment in the Greater Glasgow area’s waste water network. This, in turn, is the first step in a much larger investment programme to improve the area’s drainage and sewerage infrastructure, which is essential to Glasgow’s economic prosperity.”

Douglas Millican, Scottish Water’s Chief Executive, said: “The environment and communities throughout Greater Glasgow will benefit significantly from the Shieldhall Tunnel and other investment by Scottish Water because it will protect the natural environment and meet the needs of growth, economic development and regeneration. It will also support jobs and employment opportunities, including a number of apprenticeships.”

Added Neil Grosset, CVJV Project Director: “This is a huge project for Glasgow and all at Costain and VINCI Construction Grands Projets are honoured to be delivering such an important part of infrastructure that will benefit the city for many years to come.”